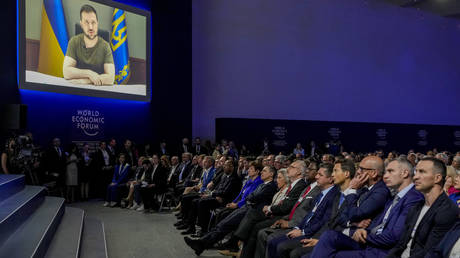 A guest on the network falsely claimed that Chinese diplomats sat down during a standing ovation for Ukraine’s Volodymyr Zelensky Volodymyr Zelenskyy addresses delegates at the World Economic Forum in Davos, Switzerland, May 23, 2022 © AP / Markus Schreiber

CNN apologized on Thursday to China’s Global Times newspaper for a broadcast on Wednesday in which US Representative Michael McCaul accused a Chinese delegation of remaining seated during a standing ovation for Ukrainian President Volodymyr Zelensky at a World Economic Forum meeting. The seated delegation were Vietnamese, according to Chinese reports.

McCaul, a Republican from Texas, told CNN on Wednesday that he had been sitting in front of a “Chinese delegation” during Zelensky’s speech at the World Economic Forum’s annual meeting in Davos, Switzerland, on Monday. McCaul said that as leaders in attendance stood and clapped for the Ukrainian president, this delegation remained seated in silence, before walking out of the auditorium.

Read more:   Speaker Sahiba Gafarova: "Armenia does not desist from its criminal course even now"

CNN displayed video footage of the diplomats in their seats, and McCaul told the network that the scene “sent a clear message they do not support Ukraine.” (RT)