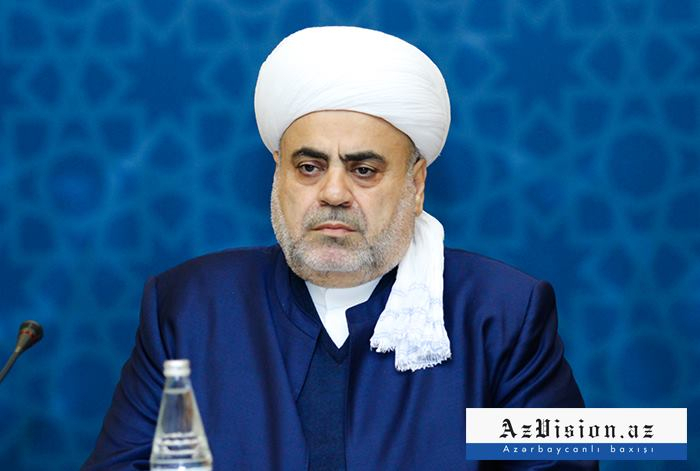 Chairman of the Caucasus Muslims Office (CMO) Sheikhulislam Allahshukur Pashazade has issued a statement regarding Catholicos of All Armenians Karekin II’s calling on the Armenian people and even children to fight to the death in the military war.

The statement says: “Since July 2020, Armenia’s aggressive regime has resorted to new military provocations and targeted our residential settlements and civilians in Azerbaijan’s Nagorno-Karabakh region and surrounding areas, as well as on the state border with Armenia. The failure of the OSCE in the negotiation process of the Nagorno-Karabakh conflict for almost 30 years to yield practical results, the fact that four UN Security Council resolutions remain unimplemented, and the recent military aggression of Armenia have exhausted the patience of our people. And Azerbaijan, exercising its sovereign right, rose for the struggle to restore its territorial integrity and liberate its territories recognized by the international community.

The relevant agreements on a temporary humanitarian ceasefire were achieved at the meetings held in Moscow and Washington involving foreign ministers of Azerbaijan and Armenia, mediated by Russia and the United States. However, the facts have proven that Armenia does not tend to peace at all and is abusing the ceasefire to demonstrate its real aggressive nature. Immediately after these agreements, Armenia has continued to commit war crimes and acts of vandalism in a gross violation of the relevant UN Security Council resolutions and the 1949 Geneva Conventions, and launched heavy artillery and missile strikes on the residential settlements of Azerbaijan located hundreds of kilometers from the conflict zone. As a result of these attacks as well as the shelling from Armenia’s territory of Azerbaijan’s cities and residential settlements, including Azerbaijan’s second largest city of Ganja, 65 civilians including minors have been killed, 297 people have been wounded, 2243 houses, 90 multi-apartment residential buildings, 402 civilian facilities have been destroyed, several children have lost both parents since September 27.

Since the outbreak of the conflict, Armenia has committed acts of terrorism against civilian population and destroyed our temples, cemeteries, historical monuments, museums and libraries in the occupied territories. Unsatisfied with this, the aggressive Armenian extremists turned our mosques located in the occupied territories into barns and committed unprecedented acts of vandalism, such as keeping there animals that are forbidden in Islam. As a result of the Armenian aggression, hundreds of mosques, temples and churches, thousands of cemeteries, 706 historical monuments and museums, 927 libraries, 1107 educational institutions, 40,000 museum exhibits were destroyed and looted in the occupied territories of Azerbaijan.

Despite all this, Azerbaijan and its people have always sought a peaceful solution to the conflict and negotiations at various levels including the religious one. The trilateral meetings held between religious leaders in Montreux, Rostov, Moscow, Tbilisi, Yerevan, Baku to find a peaceful solution to the Armenia-Azerbaijan Nagorno-Karabakh conflict were aimed at preventing it from escalating to a religious level.

It should be noted with regret that in exchange for our permanent efforts to achieve a just and peaceful solution to the conflict the opposite party, especially the Armenian church has continued its aggressive attitude and incendiary activity. Thus, Catholicos of All Armenians Karekin II’s latest appeal a few days ago, his calling, on behalf of the church, the people and even children to fight to the death in the military war doesn’t bring him respect as a religious leader and serves the intention of presenting the conflict as a religious one, presenting it as Christian-Muslim confrontation that may lead to greater catastrophes.

The main moral duty of a cleric is to protect human life and rely on justice. Karekin II says that Azerbaijan forced them to the current war. Let me ask a question: Did Azerbaijan call you to war on its territory or did Azerbaijan set eye on your lands? The Armenian religious leader says that Karabakh can never be a part of Azerbaijan. Isn’t this justification of the act of aggression and incitement of the two peoples to confrontation by a cleric? The question is how quickly did you forget tens of thousands of Armenian citizens who still live in peace in Azerbaijan today, the restored and well-preserved Armenian church and library located in the center of Baku? Contrariwise, isn’t the destruction of our cultural and spiritual heritage, the absence of Azerbaijani population in Armenia and the occupied territories of Azerbaijan a clear example of your policy of ethnic cleansing and vandalism?

The Armenian church calls us an enemy, calling on international community to “get rid of this atrocity.” The question is: Since when is the liberation of one’s lands from invaders called savagery? Or maybe the atrocities committed against the civilian population in Azerbaijan’s Khojaly, Ganja and Tartar, as Karekin II said, are written in bloody letters in the history of “the protection of the motherland and statehood”?

The whole world should know that the current military clashes are taking place in Azerbaijan. We are not against any religion or nation in defending our just cause, we have not invaded any country, and we consider the Armenians living in Karabakh not our enemies, but our citizens. United around our leader President Ilham Aliyev and once liberated our ancient occupied lands from invaders, we are determined to live together with Armenians, develop our Karabakh and turn it into a prosperous place.

We count on the support of the entire world community in our intentions to achieve peace and tranquility in our homeland of Azerbaijan!”