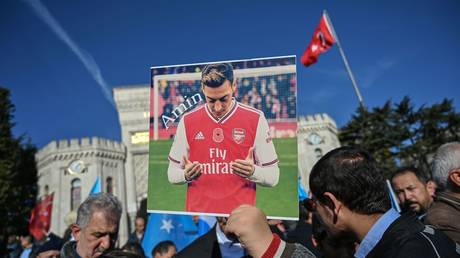 Chinese state television has decided to cancel its scheduled broadcast of Sunday’s English Premier League game between Arsenal and Manchester City after Mesut Ozil posted about the treatment of Uighur Muslims in the country.

The Chinese Football Association branded Ozil’s stance as “unacceptable” and that it “hurt the feelings” of Chinese football fans, after the Arsenal playmaker noted his opposition to the treatment of Uighur Muslims in the north-western region of Xinjiang. Ozil was also critical of Muslims for failing to highlight the issue.

China has vigorously denied any such persecution.

In response to the comments, CCTV announced that they will show Sunday’s fixture between Tottenham and Wolves instead of Arsenal’s home game with the defending Premier League champions.

“East Turkistan, the bleeding wound of the Ummah, resisting against the persecutors trying to separate them from their religion,” Ozil wrote in his post, via translation. “They burn their Qurans. They shut down their mosques. They ban their schools. They kill their holy men. The men are forced into camps and their families are forced to live with Chinese men. The women are forced to marry Chinese men.

“But Muslims are silent. They won’t make a noise. They have abandoned them. Don’t they know that giving consent for persecution is persecution itself?”

Arsenal distanced themselves from Ozil’s comments on Saturday, saying that they take an apolitical stance on matters such as this.

“Regarding the comments made by Mesut Ozil on social media, Arsenal must make a clear statement,” the club said in a statement. “The content published is Ozil’s personal opinion. As a football club, Arsenal has always adhered to the principle of not involving itself in politics.” (RT)