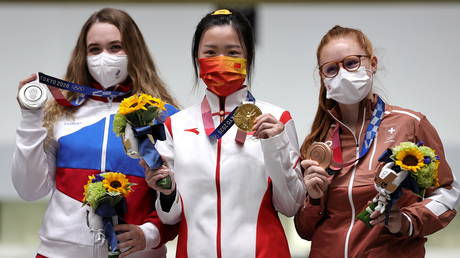 China’s Yang Qian has won the women’s 10-meter air rifle competition just ahead of Russian shooter Anastasiia Galashina, bagging the first gold medal up for grabs in Tokyo, while the bronze went to Switzerland’s Nina Christen.

The Chinese shooter set a new Olympic record of 251.8 points, with a small lead over the Russian, who scored 251.1. Galashina’s last shot was also her worst, at a strikingly low 8.9, which allowed Yang to seal her victory with a mediocre but sufficient enough 9.8.

Christen was eliminated with a score of 230.6, but nevertheless took the first bronze for Switzerland.