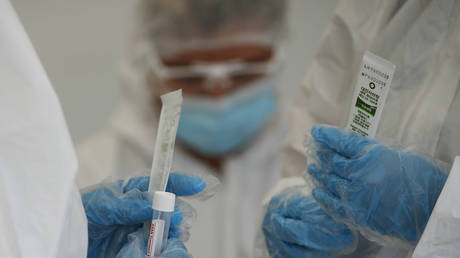 The Chinese embassy in Kazakhstan has warned its citizens in the Central Asian country to exercise caution amid a large outbreak of viral pneumonia, which appears to be deadlier than the new coronavirus.

Between Covid-19 and the pneumonia outbreak, the diplomats described the health situation in Kazakhstan as “very grim.” Since the start of the year, 1,772 people have died of pneumonia in the country. In June alone, there were 628 fatalities, including Chinese citizens, a statement on the embassy’s website reads.

“The mortality rate of the disease is much higher than that of the new coronavirus pneumonia,” it said. The Kazakh Ministry of Health and other scientific bodies have been conducting “a comparative study” on the pneumonia virus and Covid-19, but no definitive findings have been made yet, the embassy added.

The diplomats urged citizens to take the same precautions as with the Covid-19 disease, which originated in China’s Wuhan in December and has infected more than 12 million people worldwide, killing over 550,000. (RT)