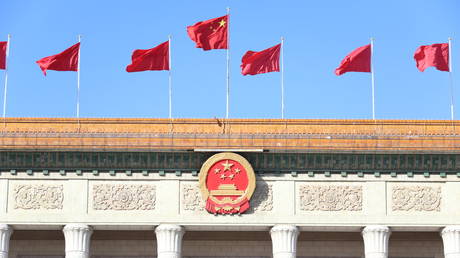 A Chinese national flag flutters on the Great Hall of the People in Beijing, China. © VCG / VCG via Getty Images

Beijing rejects the group’s demand to halt support for Russia amid sweeping sanctions A Chinese national flag flutters on the Great Hall of the People in Beijing, China. © VCG / VCG via Getty Images

China has responded to the G7’s request that Beijing cease support for Russia amid extensive Western sanctions, stating that the country decides its own position and policy based on the “merits of the matter itself,” and that the seven member nations should focus on their own issues instead of intervening in other countries’ internal affairs.

The statement came after the foreign ministers from the Group of Seven (G7), which includes the US, Germany, Italy, Canada, the UK, France and Japan, issued a statement on Saturday calling on Beijing to “resolutely” urge Russia to stop the war in Ukraine and refrain from providing economic and military assistance to the Kremlin. The group also insisted that China “support the sovereignty and independence of Ukraine” and “urge Russia to stop its military aggression against Ukraine.”

The lengthy statement went on to warn Beijing “not to assist Russia in its war of aggression against Ukraine,” “not to undermine sanctions imposed on Russia” and not to justify Russia’s actions in Ukraine through the use of “information manipulation, disinformation and other means.”

During a press conference on Monday, Chinese Foreign ministry spokesperson Zhao Lijian slammed the demands and urged the G7 countries to stop imposing illegal sanctions and provoking other countries and instead focus on other important global and internal issues.

“We call on the G7 countries to truly focus on peace and development throughout the world, to stop applying double or even multiple standards, to stop sending military aircraft and ships to the borders of other countries with or without reason to demonstrate their strength,” Zhao told reporters during a press conference on Monday.

Zhao also insisted that the seven nations “stop going to other countries to organize ‘color revolutions’ at every opportunity” and stop imposing sanctions on sovereign countries using “extraterritorial jurisdiction.”

The G7 also expressed concern regarding China’s involvement in the situation in and around the East and South China seas, advising Beijing to avoid threats, coercion, intimidation measures and the use of force, demanding that China grant impartial monitors access to Xinjiang and Tibet. The group also called for peace and stability in Taiwan and expressed support for Taiwan’s participation in the World Health Assembly and WHO technical meetings. (RT)