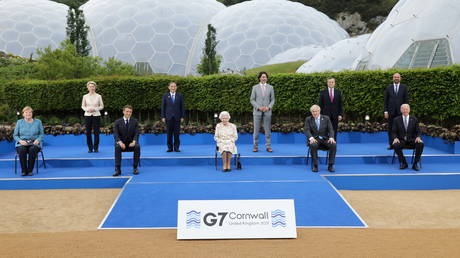 World leaders pose for a group photo during a drinks reception on the sidelines of the G7 summit, at the Eden Project in Cornwall, Britain June 11, 2021. ©  Jack Hill/Pool via REUTERS

Beijing has dismissed the notion that G7 nations can chart the trajectory of global affairs, arguing that decision-making by small clubs has been replaced by genuine multilateralism.

Washington has described the Group of Seven summit in Cornwall, southwestern England, as an opportunity to reinforce the so-called “rules-based international system” – an assertion that China disputes. (RT)