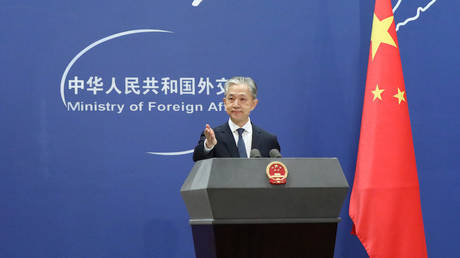 Taiwan is an internal Chinese matter and attempting to link it to events in Ukraine is inappropriate, Foreign Ministry spokesman Wang Wenbin said on Friday. He also criticized US Vice President Kamala Harris for her comments about Washington wanting to further develop its ties with the island.

“Anyone who seeks to insinuate [the] relevance of the Ukraine issue to the Taiwan question is invariably driven by political calculations,” Wang said at a regular press briefing, after AFP asked why Beijing hadn’t “explicitly” condemned Russia over Ukraine and whether that would encourage separatism.

“Such insinuation would constitute a violation of the principle of respecting a country’s sovereignty and territorial integrity and serious interference in China’s internal affairs. Anyone hoping to exploit the Ukraine issue and find pretext for ‘Taiwan independence’ will only end up nowhere,” Wang added.

“Taiwan is an inalienable part of China’s territory and the Taiwan question is purely China’s internal affair,” he insisted. “The Taiwan question and the Ukraine issue are different in nature and are not comparable at all.” 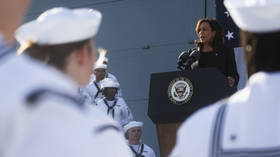 US to deepen ‘unofficial ties’ with Taiwan, VP says

AFP’s question came after Wang condemned remarks by US Vice President Kamala Harris, who visited Japan this week and said her government intended to “support Taiwan’s self-defense” and “deepen our unofficial ties” with the island. She also accused China of seeking to undermine the rules-based international order.

The US already violated China’s sovereignty and territorial integrity with the visit of House Speaker Nancy Pelosi to Taipei in early August, Wang pointed out. While not specifically commenting on what Harris said, he noted that this brought into question the US commitment to the ‘One China’ policy, repeatedly confirmed in writing over recent years.

“Speaking of rules, keeping one’s commitment is the most basic rule,” Wang told reporters. “If the US cannot even keep its own word, in what position is it to talk about rules and order? A country like that could only become a disruptor of international rules.”

Taiwan has been run by Chinese nationalists who left the mainland in 1949, after losing the civil war against the Communists. Beijing considers it an inalienable part of China, to be reintegrated at some point. (RT)