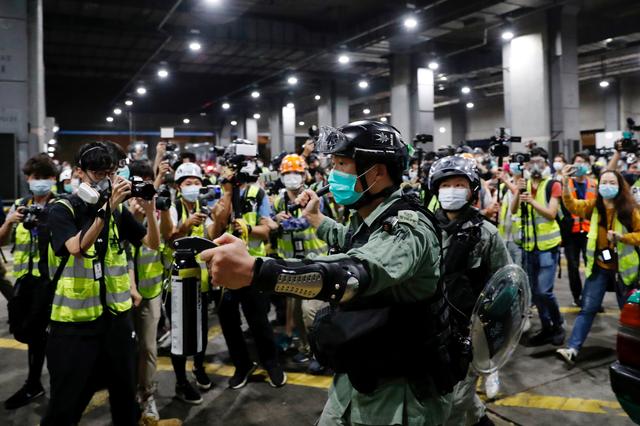 China is becoming increasingly assertive in the region as the coronavirus crisis eases on the mainland while raging elsewhere in the world, with a crackdown in Hong Kong and sabre-rattling around Taiwan and in the South China Sea, Reuters reported.

The U.S. State Department said China was taking advantage of the region’s focus on the pandemic to “coerce its neighbours”.

In a significant strike against democracy activists in Chinese-ruled Hong Kong, police in the city arrested 15 people on Saturday, just days after a senior Beijing official called for the local government to introduce national security legislation “as soon as possible.”

The arrests drew a strong rebuke from the United States and Britain.

China has also been flying regular fighter patrols near Chinese-claimed Taiwan, to the island’s anger, and has sent a survey ship flanked by coast guard and other vessels into the South China Sea, prompting the United States to accuse Beijing of “bullying behaviour.”

“Now that the domestic coronavirus outbreak has been stabilised, China wants to send an important signal to the world that its military and foreign affairs, previously put on hold, are back on track,” said Cheng Xiaohe, associate professor of international politics at Beijing’s Renmin University.

China describes Taiwan, Hong Kong and the South China Sea as its most sensitive territorial issues.

The most dramatic actions have been close to Taiwan, the self-ruled island China claims as its own. Beijing has been angered by moves by President Tsai Ing-wen during the outbreak to assert the island’s separate identity from China.

In the latest uptick in tensions, China’s navy this month sailed a battle group, led by the country’s first aircraft carrier, the Liaoning, around Taiwan’s east coast and has mounted regular air force drills near the island.

Lo Chih-cheng, a senior legislator with Taiwan’s ruling Democratic Progressive Party, said China was showing that its military power had not been affected by the virus and that things had returned to normal.

“The other aspect is of course to test whether the combat strength of the U.S. military has been reduced due to the impact of the epidemic,” he said.

The pandemic’s first cases were reported in late December in China’s Wuhan city. China has reported almost 83,000 cases and more than 4,600 deaths, but the situation there is now largely under control.

The United States has by far the world’s largest number of confirmed coronavirus cases, with more than 780,000 infections and over 42,300 deaths, according to a Reuters tally.

The United States has berthed one of its carriers in the region, the Theodore Roosevelt, in Guam, with nearly 14% of the crew testing positive for the coronavirus.

China’s Foreign Ministry said in a short statement to Reuters: “No matter when or where, China resolutely safeguards its sovereignty, security and development interests”. China’s Defence Ministry did not respond to a request for comment.

“The United States strongly opposes PRC efforts to take advantage of the region’s focus on addressing the COVID pandemic in order to coerce its neighbours in the region. We call for the PRC to live up to its international obligations,” she said, referring to the People’s Republic of China.

The U.S. military has also carried out its own South China Sea drills, and sailed through the sensitive Taiwan Strait, most recently this month on the same day that Chinese fighter jets and nuclear-capable bombers drilled in waters close to the island.

Rear Admiral Fred Kacher, commander of the USS America Expeditionary Strike Group, told Reuters that his forces had interacted with Chinese naval forces in the South China Sea this week.

“All our interactions continue to be safe and professional with them,” Kacher said in a telephone interview from the USS America, an amphibious assault ship.

China’s navy says the Liaoning was heading for the South China Sea as part of routine exercise plans, and that it would continue with such drills to “speed up the increase of the combat capability of the carrier group system”.

Beijing this month denounced criticism from the United States of its recent South China Sea moves, saying Washington had been using the South China Sea issue to smear China.

China claims much of the resource-rich South China Sea, also a major trade route. Vietnam, the Philippines, Malaysia, Taiwan and Brunei all have competing claims with China.

“China’s recent activities in the South China Sea and elsewhere in Asia have shown its intention to further militarise the area,” said Ha Hoang Hop at the Singapore-based ISEAS-Yusof Ishak Institute.

Former Philippines foreign minister Albert Del Rosario said on Sunday that China “has been relentless in exploiting the COVID-19 pandemic as it continues to pursue its illegal and expansive claims in the South China Sea.”

A senior Taiwan official told Reuters that its interpretation was that Beijing’s aggressiveness was due to President Xi Jinping’s need to boost his prestige at home as Beijing tackles mounting international criticism over the handling of the pandemic, a slowing economy and rising tensions with Washington.

“If the Communists need a conflict, Taiwan will be their top choice,” said the official, who declined to be identified given the sensitivity of the matter. “But it is highly risky for Xi’s regime and we do not think they will rush into danger.”