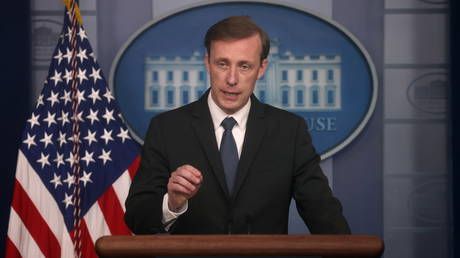 China has a choice of either giving in to the western powers’ demand and allow another WHO-led probe into the Covid-19 origin or be ostracized by the international community, US President security adviser Jake Sullivan warned.

US President Joe Biden’s national security adviser Jake Sullivan issued a stern warning to China during an interview with Chris Wallace on Fox News Sunday. Asked whether Biden intends to insist that a potential second probe into the origins of the virus must be an “independent” investigation, Sullivan said that Biden convinced Washington’s allies in the G-7 to pile pressure on Beijing.

“It is that diplomatic spadework – rallying the nations of the world, imposing political and diplomatic pressure on China, that is a core part of the effort we are undertaking to ultimately face China with a stark choice,” Sullivan said.

Read more:   Why the coronavirus is a real threat to China's economy

Beijing, Sullivan argued, was given an ultimatum: either to acquiesce to the demands and “allow…investigators in to do the real work of figuring out where this came from” or “face isolation in the international community.” (RT)

Azerbaijan has recorded 615 new coronavirus cases over the past day, the Task Force under…

Some 84,247 people received their anti-coronavirus shots in Azerbaijan today, the Task Force under the…