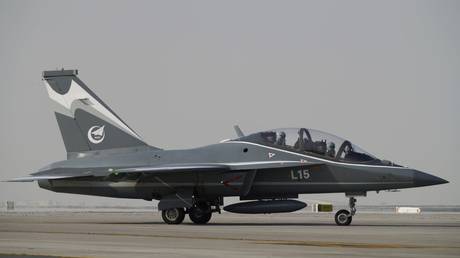 The war games come in response to the visit of a US congressional delegation to the self-governing island A Chinese L-15 fighter jet. © AP / Jon Gambrell

China’s People’s Liberation Army has deployed its Navy and fighter jets to the Taiwan Strait as part of fresh drills near the island which Beijing claims as its own. The latest show of force is meant as a “stern deterrent to the United States” after a group of five US lawmakers visited the island.

In a statement released on Monday, the Chinese military’s Eastern Theatre Command said it had conducted multi-service joint combat readiness patrols and combat exercises at sea and in the air in the vicinity of Taiwan.

The drills took place near Taiwan’s Penghu islands, which host a major air base.

Beijing shared footage of the island shot by military aircraft.

Read more:   SOCAR imported 3,900 tons of gasoline from Lithuania to Ukraine in June

Chinese military officials insisted that by allowing the lawmakers to visit the island, the US effectively infringed on China’s sovereignty and territorial integrity. They accused Washington of threatening “peace and stability in the Taiwan Strait” with its “cheap political tricks.” (RT)