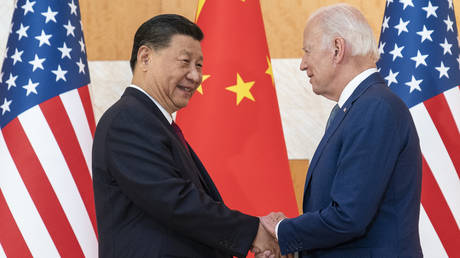 US President Joe Biden (R) and Chinese President Xi Jinping shake hands before a meeting on the sidelines of the G20 summit in Bali, Indonesia, November 14, 2022 ©  AP / Alex Brandon

China pressed the US into abandoning a plan to supply Ukraine with Polish warplanes in March, according to a report in the Spectator on Friday. Throughout the conflict, Beijing has pressed both sides to de-escalate, the report claimed.

Two weeks after Russian troops entered Ukraine in late February, US Secretary of State Antony Blinken publicly stated that Washington had given its NATO allies a “green light” to supply Ukraine with Soviet-era fighter jets its pilots could use, and that it was working on a deal where Poland would transfer its fleet of MiG-29 fighters to Kiev.

Within days, Warsaw announced that it would transfer the jets to US forces at Ramstein Air Base in Germany. Hours after this announcement, the Pentagon stopped the transfer, describing the Polish proposal as “not tenable.”

China was directly responsible for this about-turn, The Spectator report claimed. Citing an unnamed Chinese source, writer Owen Matthews described how “an urgent and confidential back-channel initiative involving former European leaders” began. This initiative was “ultimately endorsed by the Chinese,” and Washington backed down. 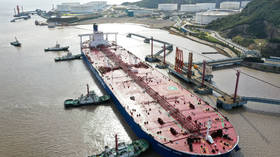 China’s efforts to prevent escalation went both ways, the report claimed. While Beijing pressed the US into stopping the transfer of warplanes, its generals reportedly phoned their Russian colleagues for assurances that Moscow would stick to its long-standing nuclear doctrine: that it reserves the right to use atomic weapons in the event of a first nuclear strike on its territory or infrastructure, or if the existence of the Russian state is threatened by either nuclear or conventional weapons.

Read more:   Rare sight of ISS passage against the Sun caught on camera

China’s position on Ukraine remains a neutral one. Chinese Foreign Minister Wang Yi declared last week that Beijing stands ready to work with Russia “and other like-minded countries to promote the development of a multipolar world,” and according to Matthews’ report, Beijing and Moscow signed a limited mutual defense pact earlier this year.

Nevertheless, China has not sold military hardware to Russia, and its diplomats continue to publicly call for a negotiated settlement to the conflict. (RT)