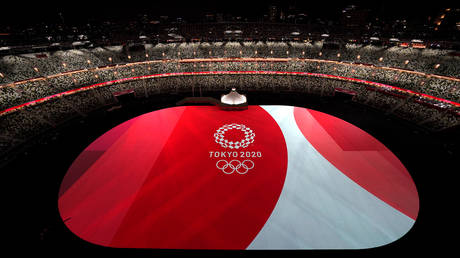 A view of the Tokyo 2020 Olympics logo. © REUTERS/Fabrizio Bensch

The Chinese consulate in New York has complained to NBC after the United States’ official broadcast of the 2020 Tokyo Olympics left Taiwan and the South China Sea off a map of China.

After NBC Sports’ broadcast showed a map of China without Taiwan and the South China Sea – both disputed territories of China – the Chinese Consulate General in New York took to social media to protest the decision.

“Using a wrong map of China is a real lack of common sense,” wrote the Consulate General on Twitter and Instagram. “Politicizing sports and violating the Olympics Charter spirits will only do harm to the Olympic Games and the relationship between the Chinese and the US people.”

Using a wrong map of #China is a real lack of common sense. Politicizing sports and violating the Olympics Charter spirits will only do harm to the #Olympics Games and the relationship between the #Chinese and the #US people. @NBCSports@SavannahGuthriepic.twitter.com/sP6AGRXLZI

In an official Chinese statement, the Consulate General went one step further, accusing NBC of hurting “the dignity and emotions of the Chinese people.”

“We urge the NBC to recognize the serious nature of this problem and take measures to correct the error,” the statement declared, warning that “attempts to use the Olympic Games to play political ‘tricks’ and [for] self-promotion to achieve ulterior goals will never succeed.”

The Chinese Global Times newspaper also condemned NBC’s map display in an editorial on Saturday, claiming that, “for a long time, NBC has been vicious to China,” and pointing out other instances of what it alleged to be anti-Chinese bias, including Japanese broadcaster NHK referring to the “Chinese Taipei” Olympic team as “Taiwan.”

“In general, we need to keep our eyes open. We hope experts on Olympic issues can actively join in to assess the various suspicious acts pointed out by netizens in a timely manner,” the newspaper concluded, accusing “Japanese forces” of “attempting to take advantage of the Olympics to engage in political conspiracies” and play “dirty tricks.”

NBC, the official US broadcaster of the 2020 Tokyo Olympics, did not respond to a request for comment from Reuters on the matter.
Though Taiwan has sought a level of independence and self-governance from mainland China, Beijing maintains that the island is still Chinese territory.

The US has not formally recognized Taiwan as an independent country, but has also not hidden its apparent support for Taiwanese independence. President Joe Biden’s administration has ramped up its diplomacy with Taiwan – further straining Washington’s relationship with Beijing – with an unofficial delegation of US diplomats visiting the island in April despite the US’ official policy of working with Taiwan only through mainland China. (RT)