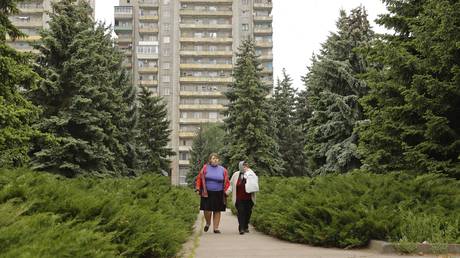 FILE PHOTO. Local residents walk in the street in the town of Svetlodarsk. © Sputnik / Sergey Averin

Kiev’s forces are accused of attacking Svetlodarsk as people were receiving drinking water FILE PHOTO. Local residents walk in the street in the town of Svetlodarsk. © Sputnik / Sergey Averin

At least three civilians, including a child, were killed on Thursday after Ukrainian forces shelled the city center of Svetlodarsk in the Donetsk People’s Republic (DPR), according to local officials.

Five 155mm artillery shells struck the city at 9:50 am as local residents gathered near a school and a city hospital to receive water. The shelling was reported by the Lugansk People’s Republic (LPR) representative office in the Joint Center on Control and Coordination (JCCC) on its Telegram channel earlier in the day.

“Three civilians were killed, including one child, and 12 people were injured. Additional information is being specified,” the JCCC reported.

War correspondent Andrey Rudenko said that the shelling of Svetlodarsk targeted a local hotel, kindergarten, pharmacy and a place where people gather water. He added that two people died on the spot as a result of the attack, including a fourteen-year-old.

Home to some 11,000 people, the industrial city of Svetlodarsk in the DPR has been the center of several battles amid Russia’s ongoing military campaign in Ukraine. Russian forces took control of the city in late May.

Read more:   With a piece of paper, Trump called on Kim to hand over nuclear weapons