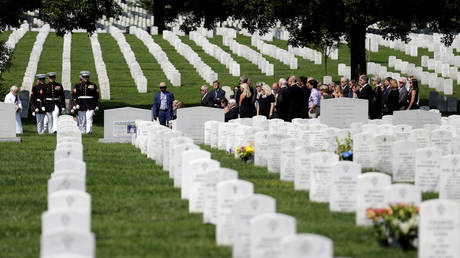 FILE PHOTO: Arlington National Cemetery's Section 60, which contains the graves of many of the members of the US military killed in Afghanistan ©  Reuters / Joshua Roberts

Ultra-hawk former vice president Dick Cheney has reprised his role as head cheerleader for the never-ending war he kicked off nearly 20 years ago. But has the prodigious conflict dragged on too long even for the war-happy MSM?

Cheney warned a rapt Dubai audience that “American disengagement” from the Middle East would play right into the hands of Iran and Russia, serving up “power voids” on a silver platter to any US rival willing to take the initiative. “Russia is always on standby to fill power voids,” he insisted on Monday, framing the Trump administration’s move to wind down its military presence in northeastern Syria as a national embarrassment sure to set the stage for a resurgence of the Evil Empire coupled with a nuclear Iran.

Disengagement is just another term for leaving all the power to them.

Citing “some deeply malign forces at work in the broader Middle East, as well as disturbing influences from outside,” Cheney warned an audience that included Dubai’s Sheikh Mohammed bin Rashid al Maktoum that “inaction can carry even greater risk than action.”

But one of the loudest voices in Cheney’s usual cheerleading militia, the Washington Post, has come down with war fatigue. Armed with six years of secret interviews (from a 2014 Pentagon program run by the Special Inspector General for Afghanistan Reconstruction (SIGAR), ironically titled ‘Lessons Learned’), the Post has published exhaustive proof that the war that began 18 years ago and has stretched on to become the longest in US history was doomed from the start.

Also on rt.com Congress must investigate why America was lied to about Afghanistan for all these years – Gabbard

“The American public have constantly been lied to” on Afghanistan, SIGAR head John Sopko confirmed to the outlet on Monday. While the agency’s reports were public, they were – until now – neutered of the most forceful language and weighted down with jargon, damning with faint praise (the US strategy was “not properly tailored to the Afghan context,” as if a nip here and a tuck there was all that was standing in the way of Afghanistan being reinvented as a glistening beacon of Democracy).

“We were devoid of a fundamental understanding of Afghanistan,” Afghan war czar Douglas Lute complained to a SIGAR interviewer, admitting “we didn’t have the foggiest idea of what we were undertaking.” And as Cheney himself said, inaction (inertia) can be deadlier than action: “if the American people knew the magnitude of this dysfunction… 2,400 lives lost… who will say this was in vain?” 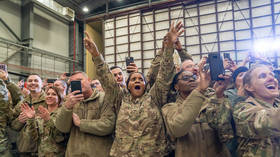 With nearly $1 trillion poured down the hole by the Pentagon alone – to say nothing of indirect expenses, the cost of caring for veterans back home, and the psychological cost of constantly lying – plus over 2,200 dead American soldiers and over 100,000 dead Afghans, the appeal of cutting America’s losses is obvious. Indeed, the appeal has been obvious since the US first set foot in Kabul – or would have been, if not for the thick wall of misinformation erected between reality and the folks back home. “Every data point was altered to present the best picture possible,” Colonel Bob Crowley, a senior counterinsurgency adviser, admitted, describing the runaway fraudulence as a “self-licking ice-cream cone.”

SIGAR was established in 2008 “to investigate waste and fraud in the war zone,” but its premise was inherently flawed – highlighting policy failures in order to avoid them during future invasions. There was no room for questioning the very notion of open-ended nation-building extravaganzas, or the US’ suitability for the role of world-police. Six years into the project, ‘Lessons Learned’ shows that none had been.

“I have no visibility into who the bad guys are,” then-Defense Secretary Donald Rumsfeld was still lamenting a year into the occupation. “Why did we make the Taliban the enemy when we were attacked by Al-Qaeda?” former White House official and Navy SEAL Jeffrey Eggers asked SIGAR rhetorically, some 15 years later. With management unable to even clearly delineate who the “enemy” was, disaster was baked into the occupation from day one.

Attempting to impose a US-style state bureaucracy at the helm of the burgeoning state only made more of a mess – in a region unaccustomed to Western-style democracy, the word is now tainted with the attendant corruption accompanying the US-installed government – corruption which benefited the Cheneys in Washington while enmeshing the Afghan people in what even the Pentagon admitted was a full-fledged kleptocracy. (RT)

Middle East cannot afford another war, it will be ‘disastrous’ for Pakistan, PM Khan warns