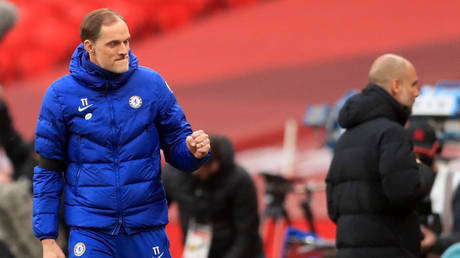 Chelsea continued their impressive form under Tuchel with victory at Wembley. © Reuters

Thomas Tuchel has been hailed for putting on a tactical masterclass as his Chelsea team shut down Manchester City to book a spot in the FA Cup final.

Chelsea edged out the runaway Premier League leaders 1-0 in their semi-final on Saturday thanks to a 55th-minute strike from Moroccan wing wizard Hakim Ziyech.

The Blues constrained their rivals with the tenacity and defensive stinginess that has become their hallmark under Tuchel, as dreams of a quadruple for Pep Guardiola’s team came shuddering to a halt at Wembley.

The win for Chelsea was yet more vindication for the decision made by Russian owner Roman Abramovich to wield the axe in January with the team struggling under Frank Lampard.

Since former Paris Saint-Germain boss Tuchel took the helm, he has set about restoring confidence in the Blues’ talent-laden ranks, moving them back into contention for the Premier League top four and booking semi-final berths in the Champions League and now FA Cup.

Tuchel, 47, will become the first German to manage a team in the world’s oldest cup competition when his team face either Southampton or Leicester City on May 15.

Moreover, Tuchel has suffered just two defeats in his 19 games in charge of the Stamford Bridge outfit, in a sequence which has included victories against teams led by managerial talents Guardiola, Jurgen Klopp, Diego Simeone, Jose Mourinho and Carlo Ancelotti – all without conceding a single goal in those games.

In three months at Chelsea, Thomas Tuchel has now beaten Pep Guardiola, Jurgen Klopp, Diego Simeone (X2), José Mourinho and Carlo Ancelotti! And without conceding a single goal either in those six matches!

Chelsea are in the Semi-finals of the Champions LeagueFinal of the FA Cup Good position for top four Thomas Tuchel. What a manager this man is..

Yet again on Saturday Tuchel got his tactics spot on, having initially raised eyebrows with the inclusion of Kepa Arrizabalaga in goal and the return of the misfiring Timo Werner up front.

In the event, the German forward was instrumental in Chelsea’s winner as he broke down the left before feeding Ziyech for a tap-in.

Prior to the game, Tuchel had hailed Guardiola’s City as the “benchmark” in Europe, although as Blues fans pointed out, that flattery was followed by a brutally efficient display on how to nullify the threat.

Elsewhere, Chelsea fans hailed Tuchel as “world class” for the impact he has made, with the ensuing reversal in fortunes barely conceivable when the German stepped into the dugout with the team embedded in a slump at the end of January.

Tuchel praised Pep Guardiola all through yesterday and beat him up today. That’s a very Pep thing to do.

Thomas Tuchel’s Chelsea have knocked out Pep Guardiola’s Manchester City out of the FA Cup and are through to the final. If you told a Chelsea fan this after they battered us at home a few months back, we’d have laughed. Unbelievable.

Chelsea reached the same stage of the FA Cup last season under Lampard before losing to London rivals Arsenal in a bitterly disappointing display, although this time around they will surely be hot favorites against either Leicester or Southampton, not least because of Tuchel’s tactical acumen.

Next up for Chelsea are Premier League meetings with Brighton and top-four rivals West Ham, before they travel to Spain for a Champions League semi-final first-leg against Real Madrid. (RT)