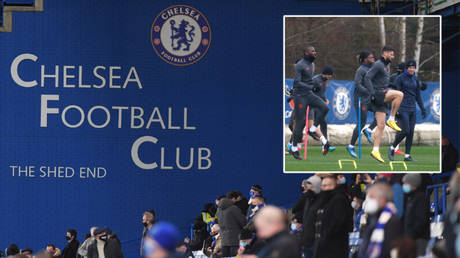 Chelsea are attempting to pull out of being one of the 12 clubs to form the new European Super League, according to reports developing while the world witnessed wild scenes outside their Stamford Bridge home as fans protested.

Fans had turned on Chelsea and Russian owner Roman Abramovich ahead of their Premier League fixture on Tuesday, when they welcomed Brighton to Stamford Bridge as supporters took to the roads around the stadium to express their disgust at the proposals.

Crowds were filmed shouting obscenities about the Super League and its vice-president, Real Madrid president Florentino Lopez, just as the news broke that the club is “preparing documentation” to ditch the hugely controversioal plans.

🚨 | #CFC fans are gathering in numbers at Stamford Bridge as they protest against the proposed European Super League ahead of Chelsea’s clash with Brighton tonight. pic.twitter.com/7PIUBRW9Ep

The scene at Stamford Bridge as it’s reported Chelsea preparing to withdraw pic.twitter.com/meZpntKiBc

Earlier in the day, an innocuous post on Chelsea’s Facebook page about the match had been greeted with promises from hundreds of fans that they would no longer be supporting the two-time Champions League winners and even hoped they lost the game.

A UEFA executive said on Monday that they expected Chelsea to be expelled from this season’s competition, in which they are due to face Madrid in the semi-finals, following an emergency meeting at the administrative body for European football on Friday.