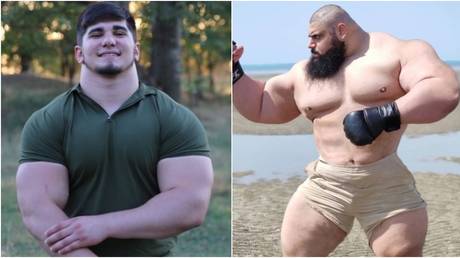 Chechen MMA fighter-turned-blogger Ashab Tamaev has challenged Iranian man-mountain Sajad Gharibi to a showdown, claiming his giant rival is not worthy of his ‘Hulk’ moniker.

Tamaev – who sports the nickname ‘the Chechen Hulk’ due to his own beefed-up physique – called out Gharibi in an Instagram post in which he mocked the Iranian’s mammoth frame.

“Sajad, you call yourself the Iranian Hulk, but I think you’re just fat and shouldn’t have such a nickname,” Tamaev goaded.

Grozny-born muscleman Tamaev, 20, has a patchy MMA background, but did take on Philip ‘Marvin’ Tretiak in a brawl in December 2018 which has racked up more than 16 million views on YouTube.

He also threw down with Ukrainian fitness blogger Bogdan Palyuk in 2019, finishing his rival with a ground and pound barrage.

But he now has his sights trained on the gargantuan figure of Gharibi, who first made headlines round the world five years ago when reports claimed he wanted to sign up to fight terrorist group ISIS in Syria.

The Iranian man-mountain, who is said to weigh in at almost 400lbs and stand more than 6ft tall, has frequently been linked to forays into combat sports.

Back in 2018 he was touted to do battle with UK giant Martyn Ford – the self-styled ‘scariest man on the planet’ – under the banner of Polish combat sports promotion KSW, although the contest never materialized.

Also on rt.com Goliath v Goliath: ‘Scariest man on the planet’ set to take on ‘Iranian Hulk’ in MMA match

Gharibi was then tipped to meet his Brazilian equivalent, Romario dos Santos Alves, although again nothing came of it.

Sadly for fight fans itching to see the Iranian titan in action, the same was true of his purported entry into bare-knuckle boxing, when promotion BKFC proudly announced that Gharibi would grace an over-the-top spectacle in 2020 titled ‘USA vs Iran: World War III’.

That never came to pass, but Gharibi still seems keen on dabbling in combat sports and last October told his Instagram following of more than 500,000 that he wanted a super-heavyweight showdown in the UFC.

“Some of this tiny and skinny fighters make me really bored,” wrote the Iranian leviathan, tagging UFC boss Dana White.

“Super Heavyweight fighting, can be more exciting, believe me! I’m totally ready for it, just tell me who is at my style and level, and where I should smash him?

“I come to Octagon for a real battle, not for fun, I will announce the opponent in the first press conference. 180kg.”

Fans are still waiting – but there could be hope after Gharibi said he will take up the challenge issued by Tamaev.

“Just sign a fight contract. I see you in the cage,” replied the Iranian to Tamaev on Instagram.

While his own fight record is thin, Chechen strongman Tamaev is nothing if not a master of promotion.

He has burnished that reputation in recent months by plugging an on-off showdown between internet sensations Hasbulla Magomedov and Abdu Rozik.

The two teenage stars – who both have a rare growth disorder – are supposedly set to meet in combat, although the bout has consistently been teased by Tamaev only to fall through.

Dagestani celebrity Hasbulla reportedly fell out with Tamaev over the financial terms, but recent reports claim that the event could be back on after a sponsor was found.

And if Tamaev can finally get the Iranian Hulk in a cage, the super-sized hype accompanying that contest could eclipse anything that the audacious blogger has pulled off so far.