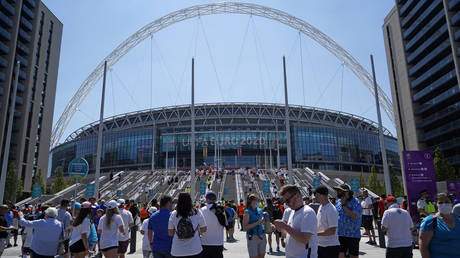 Wembley is due to host the Euro 2020 semi-finals and final. © AFP

UEFA could shift its upcoming Euro 2020 final from Wembley Stadium to the Puskas Arena in Budapest unless the UK government makes VIP attendees exempt from its strict quarantine restrictions, according to reports.

At present, an isolation period of 10 days is required for anyone that arrives in Britain from a string of countries that are still on its amber or red list – which includes most nations taking part at Euro 2020.

UEFA confirm they have a ‘contingency plan’ for the semis and final if travelling foreign fans aren’t able to attend at Wembley due to quarantine rules. Believed to be Budapest. Still in talks with UK authorities and “confident final week will be held in London”

The Times reports that Boris Johnson’s government is now negotiating plans which will allow approximately 2,500 officials from UEFA and FIFA, plus politicians and sponsors, to evade the 10-day quarantine period others have to obey whenever arriving in England.

It adds that ministers have expressed concerns that should restrictions not be relaxed, Wembley could lose both semi-finals as well as the final, which are scheduled to be held in the west London ground, with the Puskas Arena will profit from the debacle.

At the same time, however, they are also well aware that removing restrictions only for VIPs runs the risk of causing public backlash, as many in the UK have been forced to scrap summer holiday plans in popular places for Brits such as Spain and Portugal due to the protocols currently in place.

Asked if this was fair, policing and crime minister Kit Malthouse, said: “I haven’t seen the detail of that particular proposal. One of the things we are trying to do though is obviously accommodate the Euros as much as we possibly can.

“And while much of the concern around coronavirus regulations has been about whether one situation is fair compared with another situation, what we’re generally trying to do is make difficult decisions about the path of a virus, at the same time as trying to enable the ordinary operation of very special events like the Euros.

“No doubt, health professionals and the immigration professionals at the Home Office and then the senior ministers who make a decision will take all of that into account as we proceed.

“Look, it’s a great competition, we’re very lucky to have it, we’re trying to make it happen with as much kind of satisfaction all round as we possibly can and that will be taken into account in the decision over the next few days,” he finished.

It’s an unlikely scenario for Wembley to lose the semis and final, but if every other host nation in Europe prepared to waive quarantine for Euro fans, the UK is suddenly looking like an unwelcoming place for the Euros

The UK government is also calculating the likelihood of a spike in cases which could be caused if the restrictions are already relaxed for a special group.

While Wembley, which can hold a maximum of 90,000 supporters, will only be at half its capacity for the mentioned games, the Puskas Arena has been welcoming full crowds of around 61,000 for Euro 2020 games so far.

Similar figures are expected for the home nation’s game against World Cup holders France tomorrow, a potential Group F decider between Portugal and France, plus a last 16 encounter on June 27.

Wembley is set to host up to 45,000 fans for the #EURO2020 semi-finals and final.🗞 Guardian pic.twitter.com/YOOIfJTrMm

On Friday, UEFA stressed it is confident that the semis and final can still go ahead in the UK capital, and confirmed it was in talks with British officials.

“At the moment, we are in discussions with the local authorities to try to allow fans of the participating teams to attend the matches, using a strict testing and bubble concept that would mean their stay in the UK would be less than 24 hours and their movements would be restricted to approved transport and venues only,” said a spokesperson.

“We understand the pressures that the government faces and hope to be able to reach a satisfactory conclusion of our discussions on the matter. There is always a contingency plan but we are confident that the final week will be held in London.” (RT)