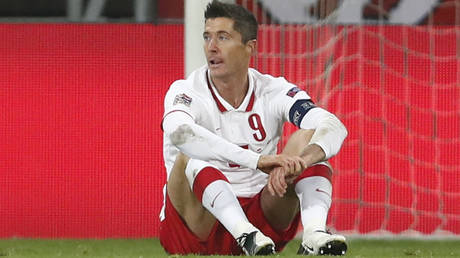 Bayern Munich goal machine Robert Lewandowksi’s battle with his ex-manager has taken another twist after the footballer-turned-agent was arrested in Warsaw, with outlets reporting “criminal threats” towards the Poland captain.

The regional prosecutor’s office in Warsaw is said to have launched an investigation into blackmail threats made by Cezary Kucharski against “an outstanding Polish footballer, former client and associate”.

Kucharski is alleged to have tried to extort 20 million euros (more than $23 million) from the striker, who was the top scorer across the major leagues in Europe last season and was a strong candidate to win the Ballon d’Or before the 2020 edition was canceled.

The former striker was reported last month to have filed a lawsuit against Lewandowski’s margeting company, RL Management, in a court in the Polish capital.

According to documents seen by Spiegel, the $10.5 million suit claimed that Lewandowski had illegally diverted “several million euros” alongside his wife, Anna, to pay for “luxury travel and expensive interior design” in dealings that could have evaded tax authorities.

Sportowe Fakty said that Kucharski had been Lewandowski’s agent for more than ten years before parting company with the Bundesliga hotshot.

The Polish source reported that Lewandowski had been accused of pre-dating advertizing contracts, run through his now-dissolved company, to avoid paying taxes.

Kucharski played in attack for Poland for six years from 1996 and was named in his country’s squad for the 2002 World Cup.

Read more:   Azerbaijan to participate in events in Poland on the anniversary of outbreak of the World War II

He will reportedly face the charges at the prosecutor’s office, where a decision will be made about applying “preventive measures”.

When Spiegel reported Lucharksi’s action, a spokesman for Lewandowski called the claims “unfounded” and was said to have accused Kucharski of defamation, harassment and blackmail, adding that he had “simply not come to terms with the termination of their co-operation”.

Lewandowski has an estimated net worth of $85 million and has continued his remarkable form during the early stages of the new Bundesliga season, netting ten times already to put him comfortably clear at the top of the German top-flight’s scoring list.

The former Legia Warsaw reserve scored an extraordinary 55 goals in 47 appearances last season as his club won the treble of the German title and cup alongside the Champions League, in which he also finished as top scorer.

After receiving the UEFA Men’s Player of the Year award earlier this month, he told his Instagram following of almost 20 million: “I dedicate my life to football and do absolutely everything possible to give 100% for my team.” (RT)