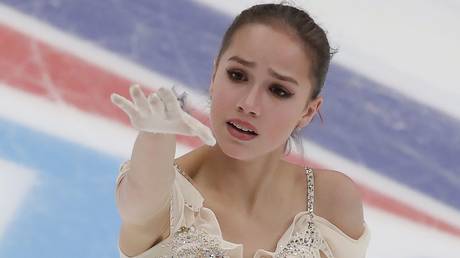 The 17-year-old 2018 Russian, European and Olympic champion and 2019 World champion said she will not seek to participate in the upcoming Russian national championships, or other major competitions.

“I’m not going anywhere,” Zagitova told reporters on Friday. “I’m staying on the ice, I will continue to train.” She clarified that she wants to learn new things, because she already “has everything.” The only thing missing seems to be her desire to compete.

I just wish that the desire to go out to the starting line would come back to me.

Her coach, Eteri Tutberidze, said that Zagitova had been talking about this possibility for the past year and a half, and that the announcement was not unexpected.

“She skates very beautifully and is very beautiful on the ice, so all of us on the coaching staff tried to convince her to continue,” Tutberidze said, adding that she hopes Zagitova will return to the ice when she starts missing the competition.

I think she’ll come to that [decision] herself.

Also on rt.com ‘I need to lose a minimum of three kilos’: Olympic champ Zagitova on readiness to land quad

Zagitova became a sensation at the 2018 Winter Olympics in Pyeongchang, producing a perfect display to beat teammate and favorite, Evgeniya Medvedeva, for the gold medal.

She set the record for ladies world combined totals later that year and went on to triumph at the World Championships in March 2019. (RT)