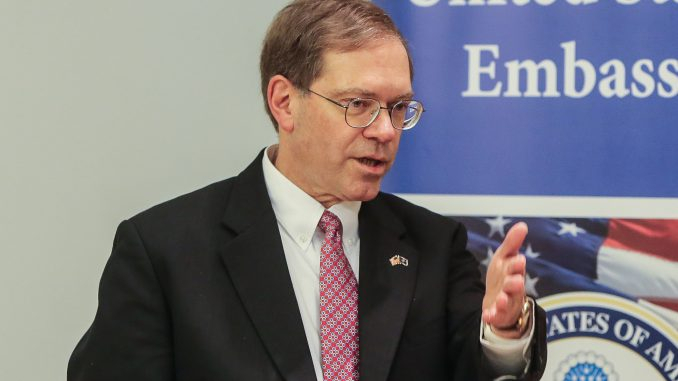 Chairman of the U.S. Educated Azerbaijani Alumni Association Nail Akhundzade sent an appeal to US Ambassador in Azerbaijan Lee Litzenberger, according to Trend.

“We the U.S. Educated Azerbaijani Alumni have always taken pride and the pleasure of being ambassadors of the U.S. culture and values in Azerbaijan and unanimously share an uncompromised and strong belief that our voice matters, in both Azerbaijan and the U.S. This belief stems from the dedicated support and encouragement we have always received from the U.S. State Department and the U.S. Embassy in Baku,” the letter said.

“Confiding in that belief, we decided to write this open letter directly to you.

Mr. Ambassador, as you are aware, as of September 27, 2020 – the day when the Republic of Armenia started its military aggression against the Republic of Azerbaijan – we have to wake up every day with the alarming and saddening news of innocent civilian people losing their lives and being hurt and wounded in Azerbaijan. Additionally, despite the signed humanitarian ceasefire, the Armenian Army continues the shelling of civilian targets in Azerbaijani cities of Ganja, Terter, Fuzuli, Aghdam, and Mingachevir. As a result, civilians, including children and women are being killed, injured and many civilian facilities are being destroyed,” the letter said.

“Sadly, though, this outrageous illegal behavior of Armenia does not get enough coverage in the U.S. media and political circles. Rather, we often see biased, infatuated statements by U.S. media and politicians on the nature of the Nagorno Karabakh conflict and on the identification of the true aggressor,” the appeal said.

“Using the opportunity, we wish to ask you to support us with the communication of our position at the U.S State Department and Congress as outlined in the attached Summary. We thank you in advance for your time and efforts in advance and looking forward to hearing from you soon. We wish you a nice week, strength, and inspiration for the noble work you are doing in Azerbaijan!” the letter said.

Turkey has stepped up negotiations to conclude an FX swap agreement, and the deal with…

Azerbaijani Culture Minister Anar Karimov’s visit to Georgia scheduled for this month has been postponed,…

19:00 Group of Azerbaijani servicemen honored with medal “For military services”

18:26 John McAfee’s lawyer says anti-virus tycoon showed no indication he would take his own life

18:26 Armenian Armed Forces fire at positions of Azerbaijan in direction of Tovuz