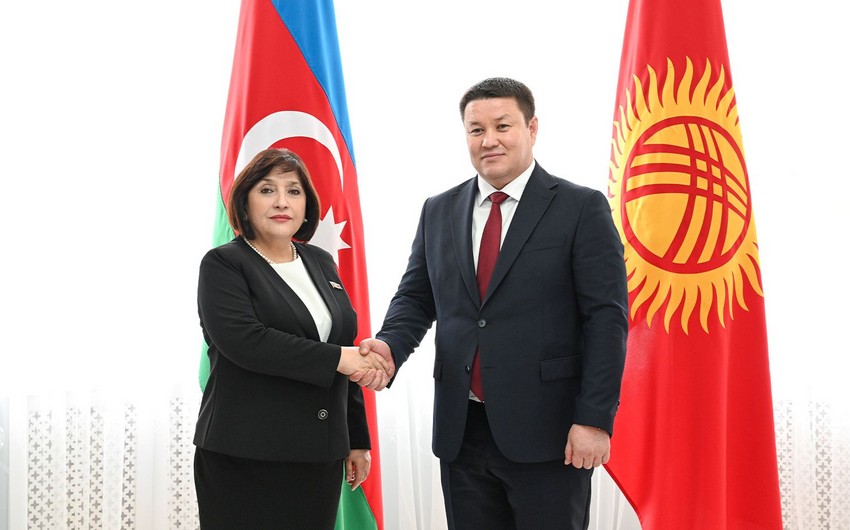 Chair of the Milli Majlis Sahiba Gafarova, who is Cholpon-Ata in the Kyrgyz Republic for the 9th plenary session of the TurkPA, has had a meeting with Chairman of the Joğorqu Keñeş (Kyrgyz Parliament) Talant Mamytov, Report informs, citing Milli Majlis.

Talant Mamytov welcomed the Azerbaijani parliamentary delegation cordially before voicing his satisfaction with the remarkable progress of our inter-state relations and talking about the deeply-rooted friendship between the two nations and the relationship’s having grown yet more profound since both states had become independent. Kyrgyzstan gives a lot of gravity to the subject of furthering her relations with Azerbaijan, while reciprocal visits and the political dialogue make certain that those relations progress, according to Mr. Mamytov.

It was said then that the advance of the inter-parliamentary relations promoted a continued deepening of our cooperation in other fields as well as that the joint activities of our legislators on various platforms served the common interest. Kyrgyzstan and Azerbaijan support each other in all the international organizations traditionally and invariably. The interaction under the roof of the TurkPA matters as much, besides, in the opinion of the Chairman of Joğorqu Keñeş.

Chair of the Milli Majlis Sahiba Gafarova expressed her thanks for the generous hospitality and then broached the subject of the many centuries of our nations’ friendship and brotherhood. We are brought together by the common roots and values and the similar historical paths we have negotiated, according to Mrs. Gafarova.

The high level of inter-state relations is in large part due to the leaders of their two states, their meetings, and visits. Saying this, Mrs. Gafarova recalled the visit of President Sadyr Japarov of the Kyrgyz Republic to Azerbaijan and the important meetings held during it in April this year.

Our diplomatic relations are turning thirty years in 2023, by the way, and the Azerbaijani-Kyrgyz connexions have attained the stage of strategic partnership in all those years, Mrs. Gafarova continued. The legislative assemblies are playing their special role in the deepening of the relationship, she added before recalling fondly her previous encounters with the Chairman of the Kyrgyz Parliament.

Sahiba Gafarova underscored the significance of the cooperation under the aegis of the TurkPA, given the Assembly’s role ever gaining in importance to the backdrop of global developments and processes. It was its activity that our joint entity has proven during the past years that it was an efficient means of bringing our peoples yet closer. The 9th plenary session of the TurkPA would also contribute to the future workings of the Assembly and the intensification of the linkage amongst the member-states, Sahiba Gafarova remarked with conviction.

Then, the Chair of the Milli Majlis talked about Azerbaijan’s remarkable victory in the 44 days’ Patriotic War and about the new situation established in our region. Azerbaijan made her national territory whole again by recovering her lands from the Armenian occupation, having lasted for nearly three decades – to find, upon doing so, that Armenia had plundered the whole of our tangible cultural heritage formerly to be found in those areas and had laid to waste all of our towns, villages, and mosques there. Azerbaijan is implementing large-scale projects aiming to revive those territories currently, therefore. Our country is keen on constant peace and security as well as on cooperation in the region and is doing all the steps it takes to make that wish come true.

Other subjects of shared interest were talked over, too, as the conversation went on.