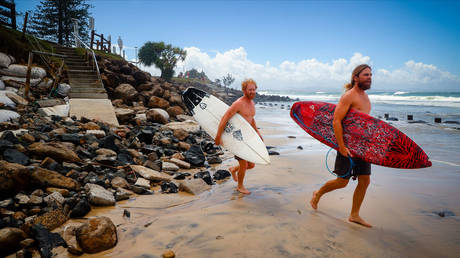 Netflix’s plan to film a reality show about the dramatic struggles of Instagram influencers at an Australian beachside town has caused a backlash from the locals, who say the production would be disrespectful and even damaging.

Over the past several years, Byron Bay, a small town in New South Wales, has become a hotspot for celebrities, whether they’re posting photos of ‘Instagrammable’ locations or even moving in. So one can understand why video streaming behemoth Netflix earmarked it for a new reality show called ‘Byron Baes’.

Byron Bay will serve as the backdrop for “hot Instagrammers living their best lives, being their best selves, creating the best d̶r̶a̶m̶a̶ content. #nofilter guaranteed,” Netflix said about the “docu-soap.” But what the network promised would be an eight-part “love letter” to a town that would be “the playground of more celebrity-adjacent-adjacent influencers than you can poke a selfie-stick at” was perceived with far less enthusiasm by many locals.

On Monday, over a hundred protesters paddled out at Byron Bay’s Main Beach to create a giant ‘No’ symbol in the ocean, local newspaper Byron Shire Echo reported. The ceremony is usually performed by surfers to send off a deceased loved one, but this time it was a gesture of protest against the proposed show.

The demonstration was the latest in a series of community events aimed at stopping Netflix’s plans. Some of the activists are local shop owners, who said they will not allow their venues to be used for the shooting.

There is also an online petition calling for a boycott of the filming crew, should the on-site production launch in May as scheduled, which has scored over 8,000 signatures at the time of writing. Byron Bay has a population of less than 10,000. But the call is addressed to the larger Northern Rivers region and became national news in Australia, so it’s safe to assume that some of the supporters are not from the town itself.

A post shared by The Byron Bay General Store (@byron_general_store)

The residents are angry at Netflix for a number of reasons, from its failure to get the local community’s prior consent to the possible environmental damage that could be done by the filming. They are also skeptical that the production would serve as a significant boost to the local economy, considering that the crew can bring their own people rather than hire locals.

Most of all, the Byron Bay protesters fear that a glamorous fantasy version of their home broadcast to 200 million viewers around the world will cause an influx of new residents chasing online fame and fortune. This would further heat up the housing market, exacerbating an already serious homelessness situation and other problems, they say. (RT)