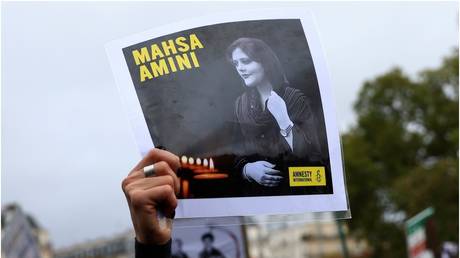 A protester holds a portrait of Mahsa Amini during a demonstration in Paris, October 2, 2022. © AP / Aurelien Morissard

The woman whose fate triggered a nationwide protest movement died from “multiple organ failure” A protester holds a portrait of Mahsa Amini during a demonstration in Paris, October 2, 2022. © AP / Aurelien Morissard

Mahsa Amini, whose death in police custody led to mass protests in Iran, did not die due to physical violence, but from cerebral hypoxia, or lack of oxygen to the brain, a coroner’s report has determined.

The 22-year-old woman was arrested by the Islamic Republic’s morality police in Tehran on September 13 for wearing an “inappropriate” headscarf. Her family claimed she was tortured and collapsed after being hit on the head.

According to the forensic report, quoted by Iran’s official news agency IRNA on Friday, Amini’s death was “not caused by a blow to the head or vital organs of the body.”

The document said Amini had underlying conditions stemming from surgery on a benign brain tumor she had undergone when she was eight.

The report stated that the woman suddenly lost consciousness and collapsed while in custody, then regained consciousness before falling again.

“Due to the ineffective cardio-respiratory resuscitation in the first critical minutes, she suffered severe hypoxia and as a result brain damage despite recovery from cardiac functioning,” the report said, adding that the woman died due to “multiple organ failure caused by cerebral hypoxia.” It did not specify whether Amini had suffered any injuries.

The largest of the protests over Amini’s death have occurred in Iran’s western Kurdistan Province, where she was from. More than 150 people have died in clashes with police, according to the Iran Human Rights group, as cited by the Associated Press. (RT)