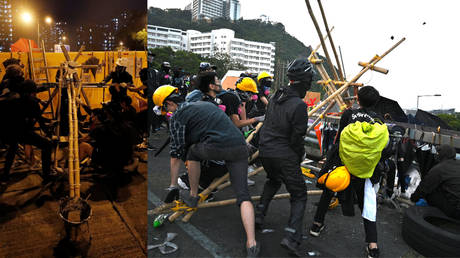 As anti-China protesters transform Hong Kong universities into “weapons factories” and arm themselves with petrol bombs, mainstream media is increasingly impressed by their ingenious and “novel” methods of taking on riot police.

Universities across Hong Kong are shuttering their doors and foreign students fleeing the chaos, as protesters hurl bricks, fire javelins, construct “watchtowers” and start fires on campuses, insisting that they have “no choice” but to resort to the most violent methods.

students at the Chinese University of Hongkong built a catapult to continue to defend themselves from the police pic.twitter.com/WKPPXvO0Wl

Yet, mainstream coverage is focusing little on the danger posed to those caught in the crossfire and instead adopting a more admiring tone, which focuses on the students’ ingenuity and the contents of their eclectic armories.

AFP, for instance, glorified the “novel arsenal” of weapons being used by students to “defend themselves” from police – from bow and arrows looted from sports stores to “giant makeshift catapults.”

VIDEO: Hong Kong students are using a novel arsenal of weapons to defend themselves and attack police, from bow and arrows looted from sports departments to giant makeshift catapults pic.twitter.com/wbXIj2SLBU

The news agency posted a video of black-masked activists hauling a massive hand-crafted wooden slingshot across a bridge, which was apparently being used to attack police officers from afar, seemingly in offense rather than defense. (RT)