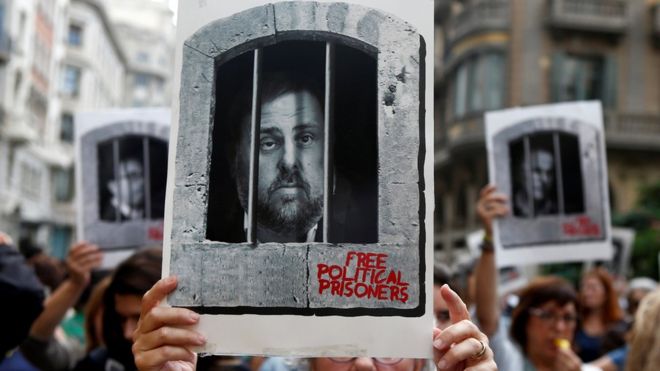 Spain’s Supreme Court has sentenced nine Catalan separatist leaders to between nine and 13 years in prison for sedition over their role in the 2017 independence referendum.

Three other defendants were found guilty of disobedience and fined but will not serve prison sentences.

The 12 politicians and activists had all denied the charges.

In response to the verdicts, thousands of Catalan independence supporters marched in Barcelona before blocking some streets and access to metro stations.

Footage showed people attempting to break through a police line blocking one area of the building, while in another, officers armed with batons confronted them.

Some of the 12 leaders sentenced on Monday had held prominent positions in Catalonia’s government and parliament, while others were influential activists and cultural advocates.

During four months of hearings, they told the court in Madrid that they were victims of an injustice in a trial built on “false” charges.

The longest sentence of 13 years was handed to Oriol Junqueras, the former vice-president of Catalonia and the highest-ranking pro-independence leader on trial, for sedition and misuse of public funds.

The prosecution had sought up to 25 years in prison for Junqueras.

The new European and international arrest warrant against Mr Puigdemont was issued on grounds of sedition and misuse of public funds.

He fled to Belgium in October 2017 to avoid prosecution in Spain following the failed independence bid.