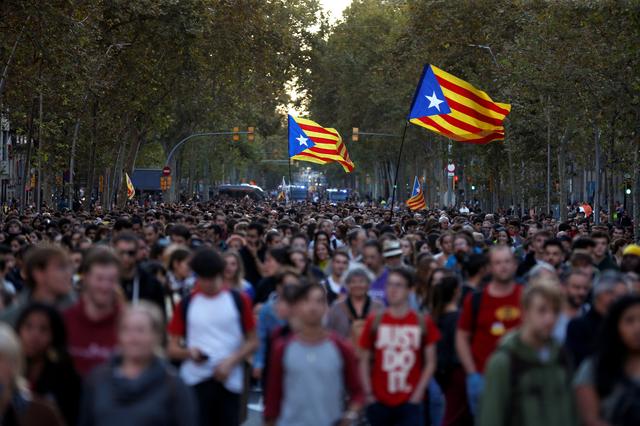 Demonstrators blocked a train station and several motorways in Spain’s Catalonia region on Tuesday, a second day of protests over Monday’s jailing of nine separatists by the supreme court over their role in a failed secession bid.

Police intervened to remove the protesters, who had turned out in smaller numbers than on Monday, while a rally in central Barcelona closed a main thoroughfare to traffic and pro-independence leaders vowed to keep pushing for a new referendum.

Various other rallies were planned for later in the day and pro-independence labor union confederation IAC announced a general strike in Catalonia on Friday against labor laws which unions say infringe workers’ rights.

Oriol Junqueras was given the longest sentence, of 13 years, for his role in organizing the 2017 referendum, which was ruled illegal. He told Reuters in his first interview after the sentence that it would only galvanize the independence movement.

“We’re not going to stop thinking what we think, ideals can’t be derailed by (jail) sentences,” he said, asserting that a new plebiscite was “inevitable”.

The head of the regional government, Quim Torra, defended the mass protests over sentencing he described as unacceptable.

“A new stage begins where we take the initiative and put the implementation of the right to self-determination back in the center” of our proposals, Torra said, urging Madrid to pay heed and start talks to that effect.

On Monday, demonstrators blocked railways and thousands descended on Barcelona’s international airport, where some clashed with police, after Junqueras and eight others were convicted of sedition and jailed for nine to 13 years.

A spokesman for the airport said it had canceled 110 flights on Monday and a further 45 on Tuesday due to Monday’s disruption.

All the defendants were acquitted of the gravest charge, rebellion, but the length of the prison terms – which Junqueras said they planned to appeal in a European court – prompted anger in Catalonia.

Two years after the debacle of the first plebiscite, Catalonia’s independence drive still dominates much of Spain’s fractured political debate, and the ruling will likely color a national election on Nov. 10, Spain’s fourth in four years.

Acting foreign minister Josep Borrell acknowledged the issue posed to Spain by the independence drive will not end with the sentencing: “Yesterday, today and tomorrow, it remains a political problem that has to be solved,” he said, calling for dialogue within the framework of the constitution.