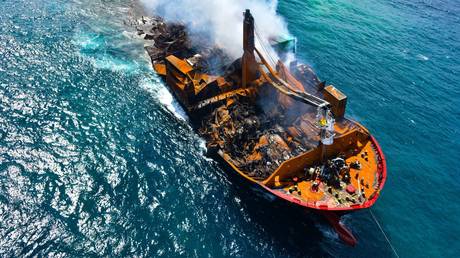 Smoke rises from a fire onboard the MV X-Press Pearl vessel as it sinks while being towed off the Colombo Harbour, in Sri Lanka June 2, 2021 ©  Reuters / Sri Lanka Airforce Media

The captain of a cargo ship which caught fire and sank off the coast of Sri Lanka earlier this month while transporting almost 1,500 containers of chemicals has been arrested, police said on Monday.

The Singapore-flagged MV X-Press Pearl reported a leak from acid it was carrying and caught fire on May 20, the day it was due to dock in Sri Lanka’s Port of Colombo.

The blaze burned for 13 days before being extinguished, but most parts of the ship sank in early June, shedding its toxic cargo and sparking fears of an imminent oil spill.

The captain of the vessel has now been arrested by officers from Sri Lanka’s Criminal Investigation Department (CID) and brought before Colombo High Court, police spokesperson DIG Ajith Rohana said on Monday.

The skipper, who local media reported is Russian, was ordered not to leave the country while the investigation takes place. Later on Monday, he was released from custody on bail of 2 million Sri Lankan rupees ($10,000). (RT)