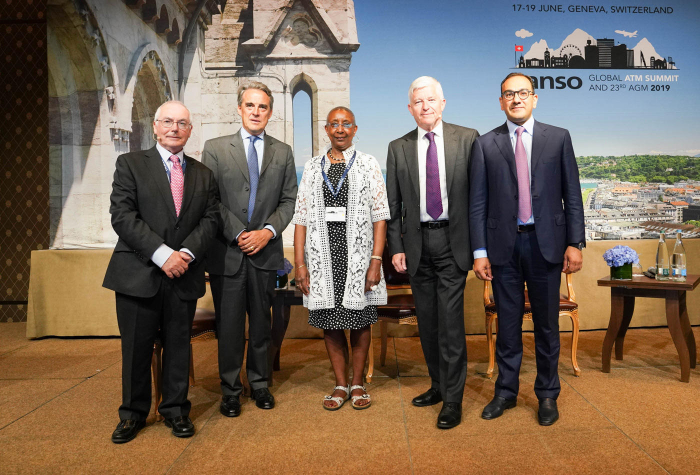 A delegation of Azerbaijan Airlines headed by the Director of Azeraeronavigation ATC, Farkhan Guliyev, participated in the World Air Navigation Summit and the 23rd annual meeting of CANSO (Civil Aviation Organization for Air Navigation Services) held in Geneva with reference to AZAL.

The event was opened by the Vice-President of the State Council of the Republic and Canton of Geneva Serge Dal Busco. Within the program keynote speakers including IATA Director General Alexandre de Juniac and Director General of the Airport Council International (ACI) Angela Gittens made speeches on the theme “Thoughtful Leadership in Aviation”. Group discussions of IATA member airlines, ACI airports and CANSO air navigation service providers were held as well.

“We are looking forward to working with the AZAL team on the CANSO Global ATM Summit and 24th AGM. Azerbaijan has a key role in facilitating global and regional air traffic and has strong links with many States and organizations worldwide. As such it will be an excellent setting for our next flagship member event, and I look forward to welcoming you all there in 2020 to explore the latest in ATM.” – Simon Hocquard, newly appointed CANSO Director General said.

It should be noted that the candidacy of Baku to host CANSO AGM-2020 was unanimously chosen at a meeting of the Executive Committee (consists of the leaders of the FAA (USA), air navigation systems of Canada, Germany, the Czech Republic, Argentina, civil aviation administrations of Singapore, Tanzania, the United Kingdom and Saudi Arabia) in Bangkok.

The annual Global ATM Summit is one of the most prestigious events in the field of civil aviation. Over 250 participants from more than 100 countries take part at the summit. Due to its scale this event is often compared with the Olympic Games in the field of aviation.

Such a large-scale and important summit in the history of Azerbaijan’s civil aviation will be held for the first time in Baku. CANSO’s decision to entrust the holding of the international summit of great importance in Baku is a clear indicator of Azerbaijani President Ilham Aliyev’s constant attention and care to the civil aviation, as well as the successes achieved in this sphere.