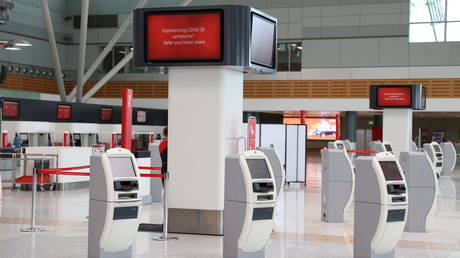 Australia has imposed a blanket ban on arrivals from India, with those daring to violate it to face jail time and heavy fines. The move has been met with criticism, but the government insists it’s needed to protect public health.

The controversial rule came into force on Monday, barring Australian citizens from returning to the country from the Covid-19 hotspot until May 15. Those who ignore the restrictions face five years behind bars and/or a fine of AUS$66,600 Australian dollars (US$51,500).

“It’s a high-risk situation in India,” Health Minister Greg Hunt said during a televised news briefing on Monday. “There has been no doubt in any of the Commonwealth advice about this measure or other measures.”

The travel ban has been supported by the country’s chief medical officer, Paul Kelly, who has admitted that the restrictions may result in the deaths of Australians who are forced to remain in India.

He set out his concerns. “These include the risk of serious illness without access to healthcare, the potential for Australians to be stranded in a transit country, and in a worst-case scenario, deaths,” Kelly said in a letter to the government on Monday. Yet the risk of importing Indian strains of the novel coronavirus into the country outweighed such concerns, he argued.

The government’s decision was met with sharp criticism from both sides of the political spectrum, with some even going so far as to allege the move was essentially “racist.” Critics pointed out that no such ban had been imposed during previous coronavirus spikes in either the UK or the US. (RT)