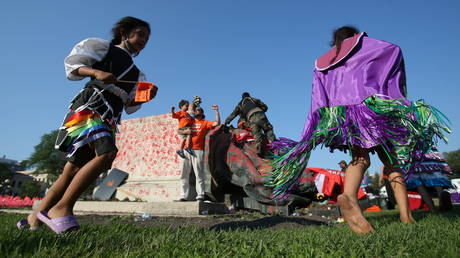 FILE PHOTO. Rally, following the discovery of the remains of hundreds of children at former indigenous residential schools, outside the provincial legislature on Canada Day in Winnipeg, Manitoba, Canada, July 1, 2021. © Reuters / Shannon VanRaes

Branding the Manitoba provincial government “racist,” Canadian indigenous groups have accused it of “distorting history” and spreading propaganda – and demanded it rethink its approach to First Nations issues or resign.

The government led by Premier Brian Pallister has been criticized in recent weeks for comments seen as “romanticizing colonialism” and downplaying the impact of the forced assimilation of indigenous peoples through the controversial residential school system.

Pallister had denounced protesters who pulled down statues of Queen Elizabeth and Queen Victoria that stood on the grounds of the province’s legislature – part of ongoing outpourings of public anger over the discovery of mass graves at former residential school sites across the country.

Standing on the steps of the legislature building on Monday, Settee and other indigenous representatives called out the province’s Progressive Conservative government, accusing them of making a “deliberate attempt to distort the history of Indigenous peoples regarding the policy of genocide at residential schools.”

MKO Grand Chief Garrison Settee is calling on Pallister to resign; says First Nations aren’t here to topple statues, but “we’re here to topple a government that is racist.” pic.twitter.com/xM9jzCXiYc

Grand Chief Arlen Dumas of the Assembly of Manitoba Chiefs said he was “tired of talking” to Pallister and slammed him as “ill-informed” and “ignorant.”

“I give him every opportunity to have meaningful dialogue. We bring forward meaningful solutions to work together, hand in hand, to move forward. But he’d rather talk at me,” Dumas said.

Among Pallister’s contentious remarks was that settlers who came to Canada didn’t come to “destroy anything” but to “rebuild” and “build better.” He also said toppled statues would be repaired and reinstalled, likely at different locations.

Pallister’s comments sparked such outrage that his own indigenous relations minister, Eileen Clarke, resigned from her position. Minutes after being sworn in to replace her, Alan Lagimodiere said those who ran residential schools “really thought that they were doing the right thing” at the time.

After a barrage of criticism, Lagimodiere issued an apology and said he “misspoke” but fallout continued as two indigenous government officials quit their positions on the province’s economic development boards. (RT)