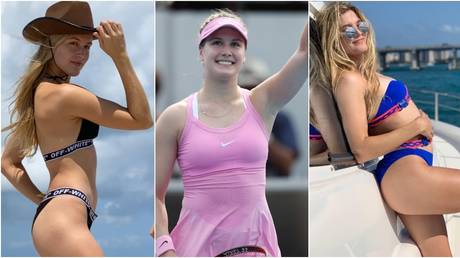 Canadian former world number five Genie Bouchard says her social media stardom has provided incredible opportunities but has also come at a cost, revealing that she now tries to “be more mature” with what she posts for fans.

Bouchard, 26, boasts an Instagram following of 2.1 million and has become almost as recognizable for her online activities as her performances on court.

Since reaching the Wimbledon final in 2014, the Canadian has slipped steadily down the rankings to the extent that she now lies outside the top 300.

That demise in the ratings has not hampered her popularity though, as Bouchard has graced the pages of glossy magazines such as Sports Illustrated and Vogue.

As Bouchard begins her tennis comeback from the coronavirus break – recording an impressive straight-sets win at the Prague Open against Russia’s Veronika Kudermetova on Monday – the Canadian said her off-court fame had undoubtedly brought opportunities but also carried drawbacks.

“One-hundred percent [it has helped with sponsorship],” Bouchard told the tennis.com podcast.

“The number one question brands ask is, ‘what’s the following?’ It’s all about that… It’s a way of valuing people, I guess, which is superficial in a way, we’re all human, but it’s a way to put a number on people.

“I’ve been through that wave so many times. It just sucks. People think social media is an exact representation of your day when it’s not.

“I can go running for eight hours then go to dinner and post a selfie and people think I just went to dinner. People need to realize it’s only what people choose to show, that’s what’s out there.”

Also on rt.com ‘There’s so much negativity out there’: Tennis ace Eugenie Bouchard discusses romance and ‘haters’ on promising $4,000 first date

“I just don’t even care anymore, it’s just exhausting. I don’t value the opinions of people out there who are just out there judging what I put out there.”

Bouchard admitted that she was trying to be more ‘mature’ with the content she puts out there for fans but dismissed the idea that doing photoshoots with the likes of Sports Illustrated had affected the downward trajectory of her tennis career.

“I really try to refrain from posting bikini pictures. I really do. I’m trying my best.

“Apparently if you post that it means you don’t play tennis or something. It’s influenced a little bit how I act.

“Maybe I’m just getting more mature and I’m like, ‘Look, I’m not going to post butt pictures every day’.

“Tennis is what led me to all these opportunities… of course I’m a tennis player first and foremost, but it opened other doors.”

One of those doors is a movie based on Bouchard’s famous ‘Twitter date’, when a social media bet on the 2017 Super Bowl game ended with her going out for dinner with fan John Goehrke.

Bouchard and Goehrke have since met up several times and remain friends, although Bouchard said that even such a seemingly innocuous encounter had caused problems for both.

“That infamous moment in my life when I tweeted when I shouldn’t have just turned into this whole thing,” said Bouchard.

“I’m in touch with him casually. Sometimes he plays hard to get and I’m like, ‘Bro, we’re friends, text me back, it’s OK’.