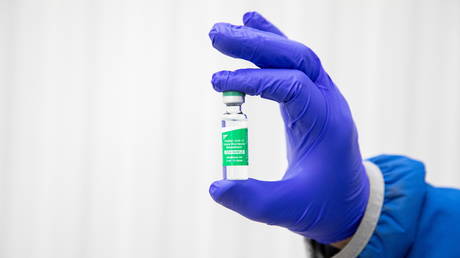 FILE PHOTO: A vial of AstraZeneca coronavirus vaccine is seen at a facility in Milton, Ontario, Canada. ©  Reuters / Carlos Osorio

Health officials in Canada’s Ontario province have suspended use of AstraZeneca/Vaxzevria Covid-19 vaccine, saying that escalating concerns over risks of blood clots merited a review amid increasing supplies of competing jabs.

The indefinite suspension takes effect immediately, Dr. David Williams, the province’s chief medical officer, told reporters on Tuesday. Public health officials are reviewing whether to allow residents who are awaiting their second AstraZeneca dose to complete their vaccination as planned.

Williams noted that data from the UK indicated far lower risk of blood clots for a person receiving a second AstraZeneca shot after tolerating the first dose safely. More than 650,000 doses of the vaccine had been administered in Ontario as of May 8.

Concerns over the vaccine stem from increasing incidence of vaccine-induced thrombotic thrombocytopenia (VITT). The province has seen 0.9 such cases per 100,000 doses of the AstraZeneca shot overall, but the rate has been around 1.7 in recent weeks.

Dr. Jessica Hopkins, Ontario’s chief health protection and emergency preparedness officer, said VITT risk was expected to be in a range of 1-in-125,000 to 1-in-1 million, but recent monitoring shows the rate with AstraZeneca’s vaccine to be around 1-in-60,000. “We’ve seen a safety signal and picked it up,” she said.

A changing Covid-19 landscape in Ontario was another component of the suspension decision. In mid-April, the rate of new cases was so high and supplies of vaccines were so low that Ontario Premier Dog Ford banned non-essential travel. He went so far as to set up checkpoints at borders with neighboring provinces to turn away travelers and said Ontario was “losing the battle” between new Covid-19 variants and its vaccine supplies.

Also on rt.com Canada’s Ontario to set up Covid-19 checkpoints at borders with Quebec & Manitoba provinces to turn away ‘non-essential travelers’

However, Williams said new infections have dropped dramatically since then, and supplies of the Pfizer-BioNTech and Moderna vaccines have become more abundant and more reliable.

Health officials made a similar decision in Alberta province on Tuesday, also halting the AstraZeneca rollout, though they said the move was prompted by uncertainty over the supply of the immunization, rather than concern about side effects.

“Based on global supply challenges, we do not know when we will get additional supply,” Deena Hinshaw, Alberta’s chief medical officer of health, said in a lengthy Twitter thread explaining the decision, adding “That’s why we are making the prudent move.” (RT)