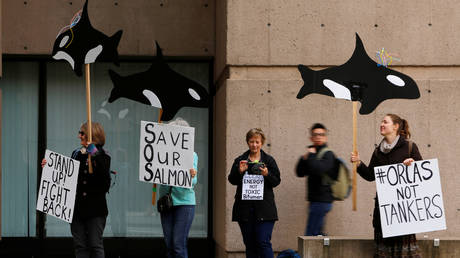 Ottawa has OKed the Trans Mountain pipeline expansion project, bogged down by delays due to concerns over oil spills in coastal waters and opposition from indigenous people living in its path.

Prime Minister Justin Trudeau, who’s been trying to carve out an image of himself as a champion of environmental protection, reasoned that the pipeline would lessen the US’ leverage over Canada.

“As we’ve seen over the past few years, anything can happen with our neighbors to the south. Right now, we’re prisoners to the American market,” Trudeau said as his government gave a go-ahead to the controversial expansion of the pipeline set to triple its capacity to almost 1 million barrels per day.

Operational since 1953, the pipeline carries crude from Alberta to the west coast of British Colombia. As the Canada’s oil production has increased, the pipeline’s capacity has become overtaxed, since it remains the only one linking the two areas. Some 99 percent of Canada’s oil exports go to its southern neighbor, making it dependent on the US.With the expansion of the pipeline and thus the connection to oil tanker traffic, Ottawa hopes to interest potential buyers in Asia.

While the project is set to bring in some C$500 million ($373 million) in federal tax revenue each year, approval of the pipeline stalled due to fierce opposition from the indigenous population and environmental groups in British Colombia voicing concerns that potential oil spills, release of chemicals and explosions could bring irreversible damage to indigenous land and water resources.

With uncertainty hovering over the future of the project, its original owner, Kinder Morgan Canada Ltd, sold the pipeline to the Canadian government for C$4.5 billion ($3.4 billion) last year. Days later, the court quashed the federal government’s previous approval of the project, citing its failure to consider the environmental effect of tanker traffic and adverse implications for the First Nations.

Effectively starting all over, the government carried out additional rounds of consultations with indigenous communities and pledged to meet all 156 conditions put forward by the National Energy Board (NEB) in its review of the project. The authorities promised to take a number of measures aimed at mitigating the impact of the pipeline on killer whales, dolphins and other marine mammals that inhabit the coastal waters, as well as step up emergency preparedness and response.

All the tax profits from the project will go towards clean energy ventures, Trudeau said. If the government succeeds in selling the pipeline, the funds will be earmarked for projects aimed at expediting Canada’s transition to clean energy.

The decision has drawn backlash from environmental advocates and conservative opposition. Patrick McCully, energy program director at the Rainforest Action Network, called out the Trudeau cabinet’s hypocrisy in giving a nod to the project a day after the House of Commons declared a national climate emergency. (RT)

The world’s second-largest oil consumer, China, could accelerate global oil demand in the second half…

The United Kingdom’s COVID-19 death toll surpassed 50,000 on Wednesday, according to a Reuters tally…

Sweden’s top epidemiologist has admitted his strategy to fight Covid-19 resulted in too many deaths,…

Italy reopens borders for tourists after months of COVID-19 quarantine

Italy was once the epicentre of the outbreak in Europe, but at the moment Rome…

President of the Republic of Azerbaijan, Commander-in-Chief Ilham Aliyev has visited a military unit in…

WHO’s Kluge warns over a second coronavirus wave in fall

The FIM, IRTA and Dorna Sports have announced the cancellation of the Motul Grand Prix…

Hajj pilgrimage from Azerbaijan may not take place this year

The Hajj pilgrimage from Azerbaijan may not take place this year, the Caucasus Muslims Office…

15:00 From Sydney to Paris, world outrage grows at Floyd’s death

14:26 Travel to Turkey will resume in summer: Embassy

13:52 US protests: Over 9 thousand people detained

13:27 Azerbaijani embassy in US appeals to fellow citizens

13:26 UK would ‘have no choice’ but to offer path to citizenship to almost 3mn Hong Kongers, PM Johnson said

13:03 Australia in its first recession in 29 years

13:00 Minneapolis racial profiling: ‘Fight it with positivity, love and understanding’