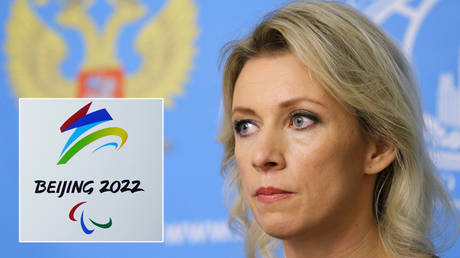 The Russian foreign ministry has rubbished calls by Nancy Pelosi and numerous figures around the world for a boycott of next year’s China Winter Olympics on human rights grounds.

The speaker of the United States House of Representatives is arguably the most high-profile politician to have called on leaders to shun the Games, with the Democrat igniting a diplomatic row by demanding that heads of state should not travel to the showpiece because of an “ongoing genocide” in China.

More than a million Uyghurs and other Muslims are thought to have been detained in the Xinjiang region, where they are widely reported to be kept indefinitely in prison-style conditions without being charged.

In July, the European parliament voted overwhelmingly in favour of a non-binding resolution to urge EU representatives to reject all government and diplomatic invitations to the 2022 Winter Olympics.

US House of Representatives Speaker Nancy Pelosi on Tuesday called for a US diplomatic boycott of the 2022 Winter Olympics in Beijing, criticizing China for human rights abuses and saying global leaders who attend would lose their moral authority: Reuters (File photo) pic.twitter.com/B0XCDkE0nE

The move left the door ajar for officials to attend if “the Chinese government demonstrates a verifiable improvement in the human rights situation in Hong Kong, the Xinjiang Uyghur region, Tibet, Inner Mongolia and elsewhere in China.”

It also called for the relationship between the EU and China to be guided by the “promotion of and respect for human rights, democracy and the rule of law”.

The Russian Foreign Ministry is evidently unimpressed by the gesturing. “This is not the first time they have discussed boycotts in relation to China and other countries in relation to other major events in general,” spokeswoman Maria Zakharova told Tass.

“They probably have such a disease – constantly discussing boycotts… but it seems to me that sports and the Olympic movement are not about that at all. It’s about achievements, about willpower… about science, about peace.”

A few people from the House of Commons launched a so-called boycott of Beijing Winter Olympics. Politicizing sports is a serious breach of the Olympic spirit and a disrespect to British athletes: spokesperson of Chinese Embassy in UK pic.twitter.com/Mlycs6D5qi

Politicians from Norway and Canada are also said to have been among the critics alongside hundreds of human rights organizations advocating a boycott ahead of the Beijing-based spectacle.

“It seems to me that we need to pay less attention to what they are discussing in their senates or congresses,” said Zakharova, speaking at an event in Moscow.

“It is not the first and not the last time that we hear all this nonsense from there.”

Pelosi had told a bipartisan congressional hearing: “Let’s not honor the Chinese government by having heads of state go to China.

“For heads of state to go to China in light of a genocide that is ongoing – while you’re sitting there in your seat – really begs the question: what moral authority do you have to speak again about human rights any place in the world?”

Liu Pengyu, a spokesman for the Chinese embassy in Washington, responded by telling Reuters at the time: “I wonder what makes some US politicians think they actually have the so-called ‘moral authority’?

“On human rights issues, they are in no position, either historically or currently, to make wanton groundless criticism against China.”

Reacting to separate calls for a boycott by the UK’s Labour party shortly before the result of the EU vote was announced, China’s ministry of foreign affairs made accusations of politically-motivated attempts to sabotage the games.

“China firmly opposes the politicization of sports and the interference in other countries’ internal affairs by using human rights issues as a pretext,” said spokesperson Wang Wenbin.

The Games, which have a slogan of ‘Together for a Shared Future’, are scheduled to take place in February.

Also on rt.com China warns of ‘robust response’ to any Olympics boycott after US stirs talk of skipping 2022 Beijing Games (RT)