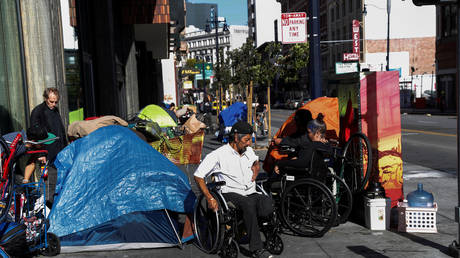 Deaths of homeless people have spiked amid the Covid-19 pandemic – but not because of the virus. Lockdowns have deprived them of everything from medical care, to begging income, to soap and water, while shelter remains elusive.

San Francisco saw 48 deaths among its homeless population over the last two months, more than triple the fatalities seen during the same period last year, according to the city’s Department of Public Health Street Medicine Team, which shared the grim statistics with the San Francisco Chronicle on Tuesday. An average of six homeless people have died every week since the city’s lockdown began in late March.

Also on rt.com I’ve seen too many families kicked out of their homes. It’s why I despair about the tsunami of evictions that’s coming

While one might expect the coronavirus to be running rampant through shelters and encampments, the city blames the lockdown itself, which disrupted the shelters and medical services homeless people rely upon. Shelters turned inhabitants out onto the street in the name of social distancing – spooked by a “massive” Covid-19 outbreak in the city’s largest shelter – while walk-in clinics closed their doors or significantly reduced operating hours.

Read more:   'Small city' of migrants apply for asylum, but most do not qualify – German migration boss

Those evicted from the shelters had to go somewhere, and the number of tents and other temporary structures in the city’s notorious Tenderloin neighborhood soared by 285 percent since January, compared to a 71 percent increase in the city as a whole. But makeshift outdoor residences lack running water and basic sanitation, and the unsightly, sidewalk-crowding sprawl became a haven for disease, as well as drugs and crime.

Unable to obtain medical treatment, and deprived of so much as a place to wash their hands, many of the city’s most vulnerable inhabitants saw their health decline during the coronavirus lockdown. While at least two of the dead had tested positive for coronavirus at one point, neither died of the virus, according to city health officials. Others fell victim to drug overdoses: with little to no income available through panhandling, recycling, or other typical revenue streams, the more entrepreneurially-inclined among the homeless population turned to preying on the addicts in their midst, brazenly selling narcotics (including the deadly fentanyl) out in the open. 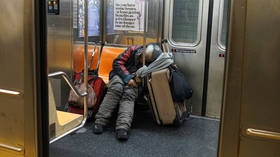 Too little, too late? Shock as NY subway cleaned overnight for FIRST time in 115 years amid Covid-19 crisis

The filth and crime eventually triggered a lawsuit from Tenderloin residents and business owners, leading Mayor London Breed to announce plans to shift the sprawling outdoor encampments into a designated area that will feature lines painted on sidewalks six feet apart so tent owners can at least maintain social distancing. More importantly, the reorganization plan adds portable public restrooms and water fountains, the absence of which has been sorely felt among homeless communities as lockdowns shutter the clinics and businesses they might once have used.

San Francisco is by no means the only city thus afflicted – Los Angeles, too, seemed initially uncertain of how to handle its massive homeless population amid the crisis, dragging its feet in installing six hand-washing stations near the city’s notorious Skid Row (population 8,500). The Los Angeles Community Action Network, a local nonprofit, bridged the gap with 30 stations of its own, fashioned from commercial trash cans and electrical junction boxes in the style of similar hygiene stations used during disease outbreaks in African nations. While the city finally contributed a few portable restrooms to the itinerant strip, even those units risk becoming infection vectors if not cleaned often enough. (RT)