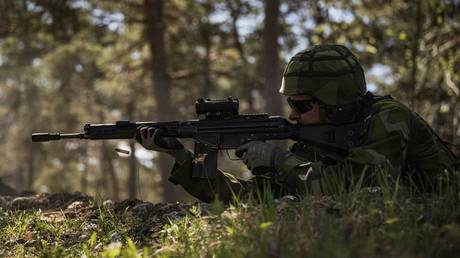 A Swedish Home Guard soldier fires a shot as he takes part in a field exercise near Visby on the Swedish island of Gotland on May 17, 2022. © AFP / Jonathan NACKSTRAND

Sweden and Finland have broken their status of neutrality and are seeking NATO membership in response to Russia’s military operation in Ukraine. It’s the latest sign that entire countries are falling for the media’s anti-Russia spiel.

After years of relatively calm relations with Moscow, Stockholm and Helsinki have cast their neutrality aside by queuing up at the NATO window for membership in the military bloc. Now, both countries will effectively lose their safety and sovereignty, not to mention spend more money, just to become indentured servants of the US military industrial complex. And, if that was not enough of a ‘reward’ for joining NATO, they will also carry a much more conspicuous target on their backs should – heaven forbid – the proverbial sh*t hit the fan between Russia and the West.

It didn’t have to be this way, of course. Sweden has not engaged Russia on the battlefield since the so-called Finnish War (1808-09), which saw the Russian Empire annex Finland from Stockholm. Thereafter, the Scandinavian empire lost its status as a major European power. Although some history buffs may seethe at this humiliating chapter of Swedish and Finnish history, which helped put Muscovy on the path to superpower status, it hardly seems like a reason to pull the trigger on Russian relations today. 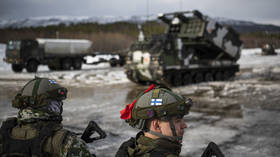 Russia comments on outcome of Sweden and Finland joining NATO

Meanwhile, the last time Finland and the Soviet Union clashed militarily was when Finland sided with Nazi Germany during World War II, in part to retake territories seized by the Soviets during the Winter War of 1939. Back then, the Soviets, looking to create a buffer zone around Leningrad (modern-day Saint Petersburg), had demanded that Finland secede some bog land for that purpose. After the Finns refused, the Soviets attacked, thus leading to a short and bloody war. In the spirit of historical accuracy, however, the Winter War was carried out by the multi-national Soviet Union, then led by a Georgian. Not the Russian Federation, the modern state that arose from the ashes of a vanquished Soviet empire in 1991.

In 2014, for example, the Western media put the Swedish public into a mild state of panic over purported sightings of a Russian submarine off the coast of Stockholm. Similar to Orson Welles’ famous 1938 radio broadcast of a fictional alien invasion, which many horrified listeners at the time took to be real, the only thing that the ‘Hunt for Red October’ produced was an alarmed population. The unsubstantiated media reports of an elusive Russian vessel prowling the waters of the IKEA Empire helped condition Swedes to the bogus idea that Russia (as opposed to steadily encroaching NATO) was the ultimate menace to global peace. 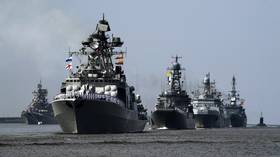 That’s the kind of propaganda pushed when the people of Crimea voted overwhelmingly in a 2014 referendum to join the Russian Federation. The peaceful integration of the peninsula, which the West has refused to acknowledge, came after a US-supported coup in Kiev overthrew the democratically elected government of Viktor Yanukovych. That brazen meddling in the affairs of a foreign state, which saw US politicians agitating crowds in Kiev against the legitimate government, unleashed a wave of violence across Ukraine, much of it aimed for the last eight years at the Russian-speaking eastern Ukrainian region known as the Donbass.

As is par for the course with the Western media, however, it never put Russia’s ‘Crimean invasion’, or the ongoing special operation, into any sort of proper context, preferring to chalk it all up to the amorphous menace of ‘Russian aggression’. It’s this sort of myopic, media-induced Russophobia that paved the way for Sweden to host Aurora 17, a three-week large-scale military exercise involving a host of NATO states, including, of course, the US. Finland, back then also an ostensibly neutral state, participated in the 2017 event as well.

For anyone who thinks that NATO today might consider cooling its heels on playing war near Russia’s border, especially in light of recent events, think again. Estonia is currently playing host to one of the largest military exercises in the Baltics since 1991. Code-named ‘Hedgehog’, the maneuvers involve 15,000 troops from 10 countries, including Finland and Sweden, and will take place 64 kilometers (40 miles) from Russia’s nearest military base.

Ironically, considering that it is NATO encroaching on Russia and not the other way around, the games are designed to simulate “an attack from Russia on Estonia.” The fact that the exercises were planned before Russia started its offensive in Ukraine on February 24 serves to support Moscow’s argument that NATO poses an existential threat to Russia and should have been immediately disbanded with the collapse of the Soviet Union in 1991. (RT)