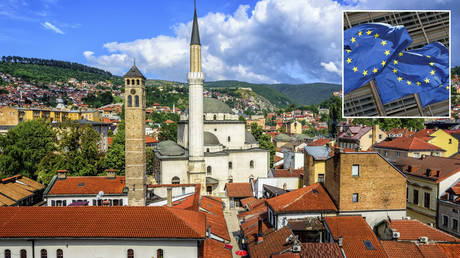 Stability in Bosnia is appearing to unravel, and the EU’s efforts to restore stability seem destined to make matters worse. While Brussels views itself as a selfless security provider, the reality is it is making matters worse.

Moreover, the EU has actually become a main contributor to the political conflict in the country, due to its attempts to assert exclusive influence. As Russia challenges the West’s hegemonic ambitions in the region, the other side is likely to blame Moscow for the unravelling of the peace in Bosnia.

After the Cold War, the West contributed to dismantling Yugoslavia as an independent entity and thereafter sought to put its constituent parts back together under the collective hegemony of the EU and NATO. The West established a parallel international legal infrastructure detached from international law under the UN Charter.

Also on rt.com Western fears over Balkan states could spell the end of the EU’s dream of an ever-expanding empire

Former Italian prime minister Giuliano Amato once cautioned that unless Bosnia became an EU member, then the alternative was that the EU “will become mired instead as a neo-colonial power”. More recently, Russian Foreign Minister Sergey Lavrov reaffirmed this sentiment by denouncing the “unacceptable colonial mentality” of the EU in Bosnia. As Western dominance declines, the entire parallel framework of international collapses.

The EU’s administration of Bosnia is often framed as colonial rule. The extraordinary powers used to govern Bosnia from abroad were intended for a politically neutral body to implement the Dayton peace agreement, before restoring the full sovereignty of Bosnia. Instead, these powers were appropriated by the EU and used to dismantle Dayton. All paths for Bosnia to regain its sovereignty are now blocked by Brussels.

The Bosnian War ended in 1995 with the deal that laid the foundation for the Bosnian constitution, which stipulated that Bosnia should consist of two autonomous entities – a Bosniak-Croat entity (Federation of Bosnia and Herzegovina) and a Serb entity (Republika Srpska). For the Bosnian Serbs, this was the third and last option as they had fought to either prevent Bosnia from seceding from Yugoslavia or alternatively allow the Serbs to stay within Yugoslavia by breaking away from a secessionist Bosnia.

Also on rt.com EU’s snub of Balkan nations exposes once and for all the myth of so-called ‘European unity’

The UN authorised the establishment of the Office of High Representative (OHR) in Bosnia to implement the entity system, and in 1997 the OHR granted itself more powers to enact laws and remove elected officials who are deemed to undermine the Dayton agreement. Thereafter the High Representatives (HR) began “Europeanising” the OHR to give the EU de facto control over the governance of Bosnia.

Once the EU had asserted near-colonial control over Bosnia, the purpose of these powers changed as the OHR began transitioning “from Dayton to Brussels”. The EU argued that Bosnia could only be stable and peaceful if it became a member of the bloc, and to qualify to join, Bosnia had to dismantle the autonomous entity system and centralise power in Sarajevo. The EU has made it clear it will not return sovereignty to Bosnia until the country “is a peaceful, viable state on course to European integration”.

Russia vs the EU

Brussels has, reasonably, argued that the fragile region should not become a geopolitical chessboard, but unreasonably argued that power games can only be prevented by imposing the EU’s exclusive influence. The bloc’s pursuit of “hegemonic peace” implies that any foreign influence from other spheres is dangerous and must be contained.

Russia is profoundly critical of the EU’s attempt to exercise exclusive influence over Bosnia – and the authoritarian and unlawful means it required. Not mincing his words, Lavrov argued that “this is a philosophy deeply rooted in the ancient colonial and half-colonial legacy of many European countries”. (RT)