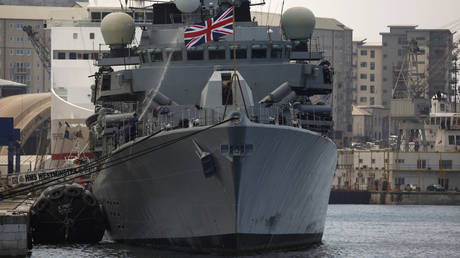 Two British gunboats will soon be cutting through the waters off the south coast of Russia, amid escalating tensions between Moscow and the West over troop deployments and NATO military activity on Russia’s border with Ukraine.

The Sunday Times reported over the weekend that a Type 45 destroyer, armed with anti-aircraft missiles, and a Type 23 submarine-hunting frigate will detach from the Royal Navy’s carrier fleet in the Mediterranean in order to pass into the Black Sea next month.

At the same time, defense sources told the newspaper that British warplanes would be standing ready on the country’s flagship aircraft carrier, HMS Queen Elizabeth, to intervene, should the vessels run into problems. Like other carriers, the waterborne runway, which can carry up to 60 jets and helicopters, is banned under international treaties from entering the Black Sea.

Also on rt.com Moscow orders ships to conduct Black Sea naval exercises amid confusion over whether US will deploy warships to volatile region

The move comes after Moscow ordered its own navy to carry out live-fire exercises in the region. In a statement last week, defense chiefs said that a frigate, Admiral Makarov, had been dispatched to the waters, along with ships Grayvoron and Vyshny Volochek, which will be supported by a missile-wielding hovercraft and a minesweeper. Large landing vessels, used for amphibious invasions, will also take part in the drills, along with fighter jets and helicopters.

“The role of a mock enemy will be played by maritime targets,” the officials said. The war games were announced just days after Turkish envoys claimed they had received notification that two US Navy ships would pass through their territorial waters on the way to the Black Sea. The move was widely seen as a show of support for Ukraine, where hostilities between government forces and troops fighting for two breakaway republics in the east of the country have escalated in recent weeks. (RT)