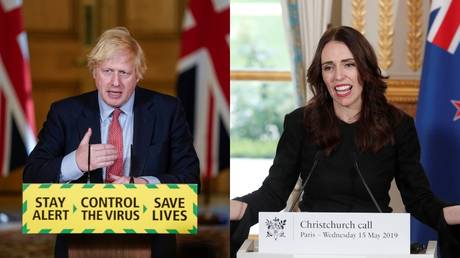 A British morning television show suffered a backlash from viewers after using unfair comparisons to suggest countries with female leaders have done a better job than their male counterparts to suppress coronavirus deaths.

In an attempt to back up that claim, they produced a graphic with British PM Boris Johnson and US President Donald Trump together on one side with their countries’ large Covid-19 death tolls vs. the female leaders of New Zealand, Germany, Denmark, and Taiwan with their relatively low fatalities from the disease.

They suggested that women have the innate ability to show more empathy than men, which has helped them to make the right calls while fighting the outbreak.

The blunt measure to compare coronavirus deaths between female- and male-led countries, without giving weight to factors such as population size and density, angered many on social media.

Furthermore, the program’s selective analysis omitted Belgium, led by Prime Minister Sophie Wilmes, which has suffered terribly during the pandemic with one of the highest Covid-19 mortality rates in the world.

British author Peter Lloyd hit out at GMB for singling out gender as a possible explanation for the success or failure of governments around the world to deal with the deadly virus, saying, “you wouldn’t have the courage to ask the same question in reverse.”

During a debate on the issue, journalist Ella Whelan told GMB that stereotyping women as “nice” and “caring” is sexist, adding: “There’s this general sense that having a bit more lipstick in the room makes things better.” (RT)