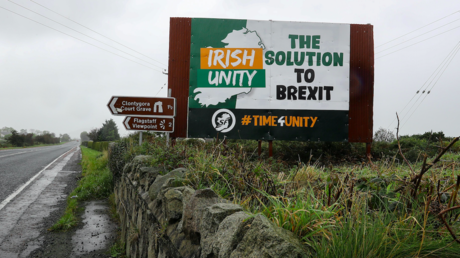 Brexit has accelerated the possibility of a referendum on Irish unity, which may be the best solution to mitigate the effects of Britain leaving the EU, a new paper on Brussels’ potential role in achieving reunification says.

The inevitability of referendums on both sides of the Irish border means “planning and preparation needs to commence and the EU will be a central part of that,” said Queen’s University Belfast Prof. Colin Harvey at the launch of the paper in the European Parliament on Wednesday, the Irish Times reported.

Speaking with his co-author, barrister Mark Bassett, Harvey said that meetings with representatives from EU member states had shown a broad understanding of the argument that Irish unity might be the best way to deal with the ill-effects of Brexit on the island of Ireland. The alternative, he said, was the “forced removal of Northern Ireland” from the EU “against its will.”

Also on rt.com Ireland needs to prepare for a border poll & plan for reunification; the alternative could be chaos

Northern Ireland voted to remain in the EU by a majority of 56 percent to 44 percent.

Harvey said that the EU accepted that Irish reunification would be seen as similar to German reunification in the sense that it would entail the expansion of an existing territory and not a new accession which needed its own accession process, the newspaper reported. The right to self-determination of people was also enshrined in international law, Bassett said.

The Irish government, led by the center-right Fine Gael and propped up by center-right Fianna Fail, has been reluctant to bring up the issue of Irish unity in the context of Brexit, preferring instead to push for Britain to strike a deal with Brussels which averts the need for a hard border to be implemented and maintains the status quo.

Also on rt.com ‘Not about winning some stupid blame game’: EU’s Tusk loses temper with BoJo over Brexit

Harvey said the government needed to be realistic about the future and recognize that people are having that discussion whether they like it or not.

“We’re trying to start tonight to have a conversation about referendums that are coming,” he said.

One Fine Gael MEP at the meeting, Seán Kelly, admitted that while he did not favor an immediate unity referendum, that Brexit had “changed the attitude and culture in Ireland” around the issue. “People are now talking about a united Ireland that were never considering it five years ago,” he said.

Sinn Féin MEP Matt Carthy added that his party was not advocating for a referendum immediately, but that the message for the government was that there was a need to start planning for the inevitable. (RT)