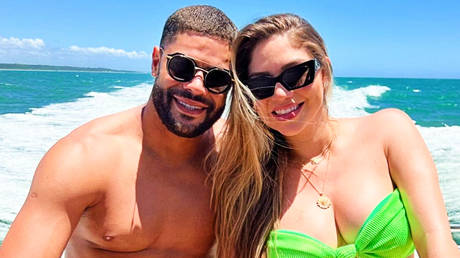 Ex-Zenit St. Petersburg forward Hulk smiled on a boat with the relative of his former spouse Camila Sousa (right) and Hulk © Instagram / hulkparaiba

Top footballer Hulk has shown off his lover’s baby bump as he prepares to become a father again with the niece of his wife from a previous marriage.

The Brazil international is relaxing with wife Camila Sousa following a hugely successful year in which the Atletico Mineiro hitman scored 19 goals for his club and won Serie A and two cup competitions.

Stunning Sousa is the niece of Iran Angelo de Souza, who the former forward for Russian champions Zenit St. Petersburg was married to for 12 years and had three children with before their split in 2019.

The frontman released a statement at the time saying that he had informed De Souza and her family of his decision, proceeding to marry Sousa the following year while he was playing for Shanghai SIPG.

Now Hulk, who reports have said has received congratulations from Paris Saint-Germain and Brazil superstar Neymar over his baby news, has proudly updated his Instagram following of more than 3.6 million on Sousa’s pregnancy.

The pair smiled on the deck of a boat off the coast of Brazilian district Trancoso during a break that Hulk described as being an “amazing tour”.

Sousa wore a bikini and embraced Hulk on a seaside bench in one snap from the photoshoot, with the couple joined in one photo by Bella Falconi.