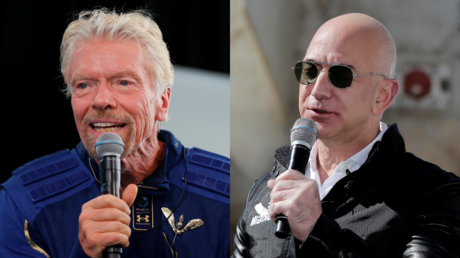 Virgin tycoon Richard Branson congratulated fellow billionaire Jeff Bezos for a successful flight to the edge of space. The hearty congratulation appears to have ended the recent rocket-waving contest between the pair.

“Well done @blueorigin, @jeffbezos, Mark, Wally and Oliver. Impressive! Very best to all the crew from me and all the team at @virgingalactic,” Branson tweeted on Tuesday, shortly after Bezos and his three-man civilian crew touched down in a West Texas desert following a short flight to the edge of the Earth’s atmosphere.

Well done @blueorigin, @jeffbezos, Mark, Wally and Oliver. Impressive! Very best to all the crew from me and all the team at @virgingalactic

Bezos flew aboard the New Shepard rocket and capsule, designed by his company, Blue Origin. The Amazon CEO has long dreamed of carrying humans into space, and hopes to offer commercial space flights for wealthy passengers in the near future. However, he was personally beaten into the cosmos by Branson, who blasted off aboard Virgin Galactic’s Unity 22 spaceplane on July 11, pipping Bezos by just over a week.

Blue Origin initially disputed Branson’s claim to actually have flown into ‘space’ proper. Unity 22 did not pass the Karman line, considered to be the boundary between Earth and space at 100 kilometers (or about 62 miles) above sea level.

However, Bezos then congratulated Branson on his flight, writing on Instagram that he “can’t wait to join the club.”

As Branson and Bezos slapped each other on the back, the billionaires faced criticism from the public. Canadian climate activist Gerald Kutney called Bezos’ journey “another vanity flight of the 0.1%… an ego trip of the elite,” and reminded the pair of plutocrats that “the first human flight into space took place 60 yrs ago.” Others hit out at Bezos for his company’s history of dodging taxes, and at both billionaires for taking suborbital flights long after astronauts have actually orbited the earth. (RT)