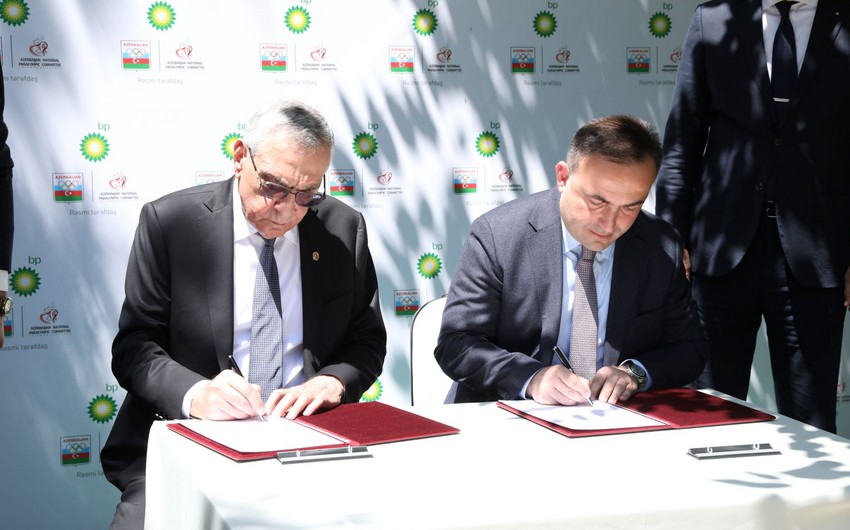 Report informs, citing BP-Azerbaijan, that under the new Agreement, bp will continue to support the country’s national teams until the end of 2024.

The initial partnership agreement was signed in January 2012, ahead of the London 2012 Games, and since then, it has been extended three times – in 2013, 2016 and now until 2024. This partnership has provided a good opportunity for bp to work closely with the two committees in support of the development of Azerbaijan’s national sport.

Addressing the extension agreement signing event held in Baku today, Bakhtiyar Aslanbayli, bp’s vice president for the Caspian region, Communications and External Affairs, said: “Taking this opportunity, I would like to extend the bp family’s congratulations to Azerbaijan’s National Olympic Committee on the 30th anniversary of their founding. This is also the age of bp in Azerbaijan. Over the past 30 years, we have joined our efforts with those of all other supporters of Azerbaijan’s national sport to provide more opportunities for development and successful participation in major international events.

Ilgar Rahimov, president of the Azerbaijan National Paralympic Committee, said: “The partnership agreement that we have signed today will further promote the development of the Paralympic movement in our country. We have been partnering with bp for more than 10 years now. We have always been very pleased to see bp’s support during various social initiatives, international Para Judo Grand Prix competitions hosted by our country and events associated with the Children’s Paralympic Movement.

“The national Paralympic team won 14 gold, one silver and four bronze medals during the Tokyo XVI Summer Paralympic Games. Now, our goal is to at least beat this achievement at the upcoming Paris Summer Paralympics. We would be very glad to see such a respected company as bp next to us while we will prepare for and participate in upcoming international competitions. bp’s continuous support of Paralympic sports in Azerbaijan helps emphasize that sport is meant for everyone in this society. I am sure that going forward, our relationship with bp will further develop and get even stronger.”

In addition to these partnerships, bp has also supported Azerbaijan’s participation in numerous big international sporting events, including the first European Games and the fourth Islamic Games held in Baku in 2015 and 2017, respectively, and the World Para Judo Grand Prix competitions held in Baku in 2020 and 2021.