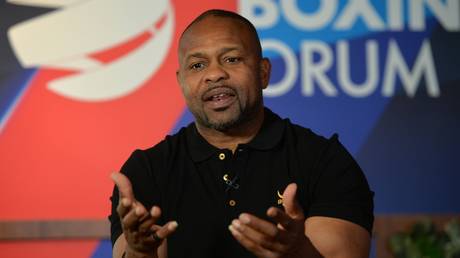 The ring icon claimed there is ‘no Olympics without boxing’ Ring legend Jones Jr is taking the fight to the IOC. © RIA Novosti / Pavel Lisitsyn

Former pound-for-pound great Roy Jones Jr headed a protest group that bore T-shirts and banners with slogans such as “no boxing without IBA” and “no Olympics without boxing” as the International Olympic Committee’s (IOC) Executive Board meeting began at Olympic House in Lasaunne, Switzerland on Monday.

The International Boxing Association (IBA), which is also based in Lausanne, was stripped of IOC recognition in June 2019 and has been urged to make reforms amid concerns about the power of its Russian president Umar Kremlev and an alleged financial dependence on Russian gas giant Gazprom.

The boxing authority will not be involved with the sport at the Paris 2024 Olympics, and boxing has also been excluded from the initial program for Los Angeles 2028 Games, which the protesters were arguing against.

Robbed of a gold medal at Seoul 1988 when losing a controversial light middleweight final to local boxer Park Hi-Sun, 90’s legend Jones is an ambassador for the IBA and arrived at the protest in a vehicle that boasted similar messages to the banners and T-shirts.

Jones was joined by the Italian head coach of Malta’s Olympic boxing team and around 80 athletes and coaches from around Europe at the height of the protest. He revealed that he is “more confident” of the IBA and boxing’s future prospects at the Olympics after personally holding discussions with the IOC.

“It sounds like the IOC really does want to keep boxing as well as the IBA, so I think we will be okay,” he told Inside the Games, while asserting that president Kremlev is the “best person for the job right now.”

“He’s cleaned IBA up, and that’s why he’s changed the name [from AIBA],” Jones Jr claimed. “He’s cleaned it up completely.”

“He’s tried to do it from a place of helping the athletes more so than anything else, and as long as we keep that intact, I think we will be okay.

“If we stick together and have a neutral opinion and make the best for the athletes, I think we will all be fine.”

Jones explained that the problem in the past was that there was “so much other illegal activity going on and so many things that were corrupt that it wasn’t working”.

“He came in and changed it, so IBA is totally different, not nearly as corrupt at it was,” he added of Kremlev.

“It had problems with funding and everything else, he fixed all those problems the AIBA had, and he changed [the name] to IBA because he should have.” (RT)