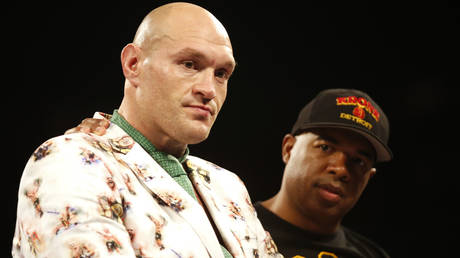 Heavyweight champion Tyson Fury has revisited the demons that nearly drove him to suicide in a passionate post on social media, warning his millions of fans to watch their own mental health and seek help in times of turmoil.

Fury has admitted that he was seconds away from killing himself in a motorway crash at 190mph in his Ferrari in 2016, battling drink and drug addiction as part of a grim bout of depression before he returned to training.

Now the WBC title holder, who regularly encourages his following of more than 3.8 million on Instagram to pay attention to their mental state, has thanked his team for taking him from the abyss to the top of his discipline again.

“I was so unwell, the only thing I could think of was death and how I didn’t want to be alive,” the 31-year-old reflected.

If you watch anything today then make sure it’s this short interview with Tyson Fury 🙌30 seconds straight down the camera, straight from the heart of @Tyson_Fury… ♥️ pic.twitter.com/vgZOag6t3b

“Just over 2.2 years later, I’m loving life, am healthy as a trout and have reached the pinnacle of sport again.

“This shows you, no matter how bad things get, you must continue as things will get better.

“I promise you, you can get your life back. Seek help immediately… much love to everyone.”

Fury dedicated his top-level comeback to others who had suffered from mental problems after drawing against Deontay Wilder in a fight many felt he had won in December 2018, having lost 10 stone to initially return to the ring six months earlier.

Massive shoutout to my team every single member you know who you are. There was a time not so long ago where I was so unwell the only thing I could think of was death and how I didn’t want to be alive, just over 2.2 years later I’m loving life and healthy as a trout, & have reached the pinnacle of sport again, this shows you no matter how bad things get you must continue as things will get better I promise you, you can get your life back. Seek help immediately #itsokaynottobeokay #mentalhealth #mentalhealthawareness #staysafe have a blessed weekend, much love to everyone 😘😍❤️

He had become lineal heavyweight champion with a points win over Wladimir Klitschko in Germany in 2015, only to suffer a mental health crisis in the months that followed.

Ben Davison, who played a key role in Fury’s comeback by training him until the end of last year, called his confidante the king of the world in reply to a post that the Lancastrian ended with kisses and heart symbols.

Long-serving promoter Frank Warren also called him an “inspiration” ahead of his expected trilogy fight with Wilder later this year, when Fury will defend the belt he won by knocking the American out in February.

Fury could fight fellow British champion Anthony Joshua in two superfights next year, having already come face-to-face with his most anticipated opponent when the pair were on separate holidays in Marbella last month. (RT)