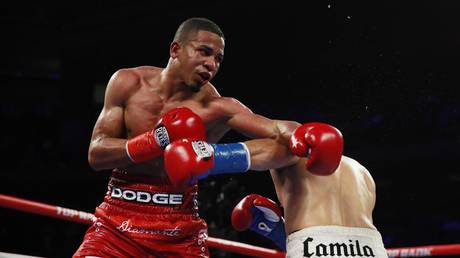 Felix Verdejo red has turned himself in after being suspected of murder. © Action Images via Reuters

Puerto Rican boxing star Felix Verdejo has turned himself in to the authorities to face charges related to the discovery of the body of a missing woman who was allegedly pregnant with Verdejo’s child, officials have said.

According to the FBI, Verdejo is accused of assaulting Keishla Rodriguez and injecting her with an unidentified substance. The complaint also states that Verdejo tied the woman’s arms and feet with wire and affixed her to a heavy object before he threw her from a bridge early on Thursday morning. It also states that he shot at the woman’s body with a gun from the top of the bridge.

The FBI added that a second unidentified person is suspected of assisting Verdejo in allegedly kidnapping and murder Rodriguez. Her body was subsequently found on Saturday at a lagoon in the Puerto Rican capital of San Juan. Rodriguez’s body was identified Sunday with the use of dental records, said Puerto Rico’s Institute of Forensic Science.

Verdejo and his legal counsel had previously refused to comment on the issue, with police also saying that the boxer was non-cooperative and refused to answer initial questions.

According to the victim’s family, Rodriguez was pregnant with Verdejo’s child. Keila Ortiz, the mother of the murder victim, told local media that her daughter had called her on Thursday and told her that she intended to meet Verdejo to show him the results of a pregnancy test.

“I told her, ‘Be careful,’ because he had already threatened her,” said Ortiz, who also said that Verdejo had told Rodriguez to not have the baby for fear of potential impact on his career and family.

It was reported that Verdejo – who is married – has known Rodriguez since they were in school together, and that she was first reported missing when she failed to show up for work at an animal grooming business on Thursday.

Verdejo was a competitor at the London Olympics in 2012 before he turned professional in the same year. The 27-year-old has amassed a record of 27-2 but lost his most recent bout by late TKO to Japanese fighter Masayoshi Nakatani last December.

Also on rt.com Boxing star ‘wanted by authorities over missing woman who was last seen at his home telling him she was pregnant with his baby’

The case involving Verdejo has immediately become a notorious one in Puerto Rico, particularly after another woman was recently found burned to death after filing a domestic violence complaint which was thrown out by a judge.

News of the discovery of Rodriguez’s body led to an outpouring of grief in the region, with hundreds of mourners gathering at the bridge near to where her body was found in a bid to demand justice for Rodriguez, as well as other women who have been killed in domestic violence incidents. (RT)