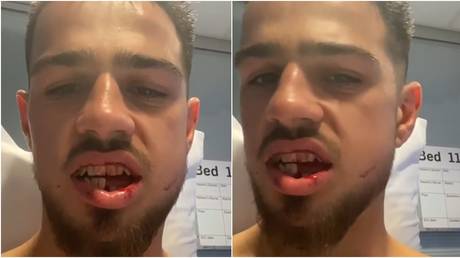 Boxer Benjamin Hussain has shown off the “horrific” broken jaw he suffered on Thursday after astonishingly managing to fight for five rounds with the injury before a doctor stopped the bout.

Hussain suffered the injury in the second round of his defeat to Ben Mahoney, but the fight was not brought to an end until he was treated by the doctor following the sixth round.

In a gruesome video he posted to Instagram from his hospital bed, the Australian revealed the extent of his injury, in which the swollen left side of his jaw is completely disconnected from the right, while his mouth is filled with blood.

This is boxing Thanks to everybody ill be back 💯%

The 21-year-old did not appear too distressed by the disturbing injury, however, and captioned the video: “This is boxing. Thanks to everybody I’ll be back 100%.”

Commentator Ben Damon described the injury as “horrific,” and said: “We thought it might have been a cut tongue or laceration inside the mouth.

“But it is a broken jaw and with that being said, Benjamin Hussain has shown he’s otherworldly tough.

“He’s gone through the vast majority of this fight with what appears to be a very, very badly damaged mouth and jaw.”

Hussain could be seen bleeding from the mouth in the second round, but it wasn’t until much later in the fight that he was assessed by the doctor, who immediately told him “it’s broken, you can’t fight.”

The fighter replied “I know, I know, I know,” but after he was told by the referee that stopping the fight would hand Mahoney a TKO victory – having apparently asked if the fight might instead be judged on the scorecards – he said he wanted to continue: “Ok, I’ll go. I’ll go.”

The referee responded: “Listen, we need, if you don’t take the advice of the doctor, I honestly…” before the doctor intervened a final time to declare the contest over: “Your jaw is broken, mate. I’m sorry, I really am. I mean it’s badly broken, we’ve got to stop. I can’t.”

It seems going to the scorecards wouldn’t have salvaged him a victory, as according to BoxRec, all three judges had scored the fight in Mahoney’s favor.

The fight was Hussain’s third as a professional and his first defeat.

As for Mahoney, he extended his record to 10-0 with what was his sixth knockout victory. (RT)