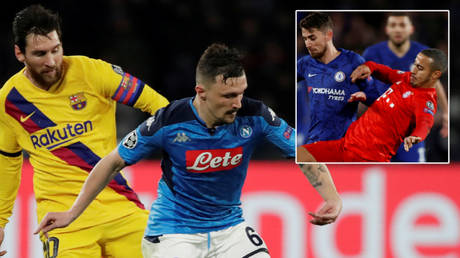 Barcelona boss Quique Setien has been in bullish mood ahead of the visit of Napoli in a Champions League round of 16 tie finely poised at 1-1 tonight, while Chelsea need a massive upset to overturn a 3-0 deficit to Bayern Munich.

Chelsea and Bayern fans aside, the split of viewing figures between tonight’s two Champions League matches will almost certainly reflect the levels of intrigue ostensibly left in each tie.

While Napoli pose a threat to Barca, having been held to a 1-1 draw after taking the lead in the first leg at the Stadio San Paolo in February, Chelsea face an almighty task to score at least three goals at Bayern, who many feel ended their European campaign with three goals in 25 second-half minutes at Stamford Bridge.

The punchline, as we know from last season, is that huge upsets are not impossible in this competition, the two most recent comebacks arriving from English teams.

Also on rt.com Maurizio Sarri SACKED by Juventus after Italian side crashes out of UEFA Champions League

Frank Lampard will almost certainly have reminded his players of Liverpool’s extraordinary completion of the 4-0 home win they required against Barca on their way to winning the trophy last season, and Tottenham’s arguably harder task in going 3-0 down on aggregate in the second leg at Ajax.

Chelsea will have performed miraculously should they give themselves any hope of progressing further towards a first Champions League trophy since beating Bayern in the 2012 final, but an early goal would offer a glimmer of hope as they attempt to go beyond the first knockout stage for the first time in six years.

Bayern will be looking to show why they are among the tournament favorites. Runaway Bundesliga winners, Hansi Flick’s side are on a run of 17 wins and have the tournament’s top scorer in Robert Lewandowski, whose 11 goals helped them to a perfect record in the group stage.

Chelsea require quality at both ends of the pitch, so it’s unhelpful that captain Cesar Azpilicueta and key creative threat Christian Pulisic both limped out of last Saturday’s FA Cup final defeat to Arsenal with hamstring injuries that will keep them out tonight.

The visitors have nothing to lose as they chase a first Champions League knockout win in 10 attempts, meaning there’s every chance that this decider could prove as goal-friendly as the 2013 Super Cup final, when Bayern came from behind twice before giving Pep Guardiola a win over Jose Mourinho on penalties.

Read more:   George Floyd's family call for end to violence and demand justice at a rally in Houston

Also on rt.com Chelsea boss Frank Lampard may have satisfied Roman Abramovich for now, but knows the bar will be set higher next season

Mourinho’s side almost blew a semi-final spot when they visited Bayern in 2005, losing 3-2 on the night but going through thanks to their earlier 4-2 home win that included a Lampard double.

Unlike Napoli, who finished their season in seventh last Saturday after an impressive 3-1 win over fourth-placed Lazio, Barcelona have had a break of almost three weeks since ending their under-performing Liga campaign with a 5-0 win at Alaves.

Lionel Messi’s murmurings about the massive improvements required to have any chance of winning the Champions League may haunt their return, as does the ensuing question of whether the beleaguered Quique Setien will change his tactics to a more committedly attacking style.

Setien has absentees in midfielders Sergio Busquets and Arturo Vidal and strikers Ousmane Dembele and Samuel Umtiti. Nevertheless, the end of Barca’s 35-match unbeaten home record against tricky rather than treacherous opposition would likely spell the end for him after less than a season in charge.

Napoli are depleted in defence, missing Kostas Manolas and Nikola Maksimovic as they look to improve on a record of one clean sheet in their last 12 matches as part of an inconsistent run in which they have won just one of their last five away games, losing three.

They are yet to succeed in five attempts at winning a European tie after drawing the home leg first but will be aware that the pressure is on Barcelona, who have reached the quarter-finals in each of the last 12 campaigns.

Setien, as you might expect, claims he has not considered whether tonight could be his last in charge. For now, thinking the unthinkable is a secondary consideration to the risk of Messi being booked and missing a likely quarter-final against Bundesliga champions Bayern.

Gattuso says Napoli will take risks. “I can mark Messi only in my dreams,” the two-time Champions League winner with Milan has admitted. “Or on my son’s PlayStation.”